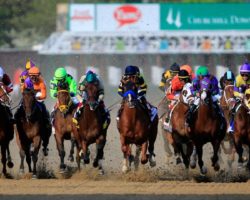 On today’s TB Podcast, I’m joined by Ryan Hasenauer of OTB and Batavia Downs to preview Saturday’s “Run for the Roses.”

Ryan gives us his four horses with the best chance to win followed by a quick breakdown of every horse in the field.

Then he fills us in on all the OTB and Batavia Downs events on Saturday including the first-ever Derby Gala — where you’ll get dressed up and enjoy an open bar!

Can’t make it to an OTB branch? No problem. Place your wagers at BataviaBets.com.

Post time for the the 144th Kentucky Derby is 6:50pm with TV coverage on NBCSN beginning at noon and on NBC at 2:30pm.

Take a sneak peek at the Derby program here.

And, for the first time in TB history, here’s an approximate transcript of the entire podcast.