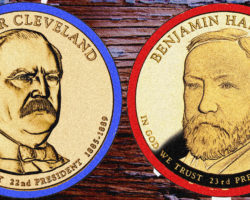 With two games left in the regular season, this is a big one.

(Mustache talk begins at about the 13:50 mark of the podcast.)

Origins of The Old Wooden Mustache
The Old Wooden Mustache grew out of one of the biggest political rivalries in U.S. History. Grover Cleveland, who served as Erie County Sheriff, Mayor of Buffalo and Governor of New York, became the 22nd U.S. President from 1885 to 1889. When running for his second term in 1888, he faced the U.S. Senator from Indiana, Benjamin Harrison. After a bitter campaign and one of the closest elections in U.S. history, Cleveland won the popular vote but lost the electoral college and Harrison became the 23rd President — with the key swing states being Indiana and New York. One result of the tough campaign was the coining of the term “Political Football.” Four years later, Cleveland and Harrison battled for the Presidency again and this time Cleveland won both the popular vote and electoral college. Thus, Harrison became the only President whose predecessor and successor was the same person, bringing to a close one of the great political rivalries in American history — with New York and Indiana playing pivotal roles.
Harrison and Cleveland are also two of the last Presidents to sport mustaches.
Ball State and Buffalo first met on the gridiron in 1969. Through 2016, the Cardinals have won every contest except the most important matchup in series history – the 2008 MAC Championship Game, in which the Bulls upset the previously unbeaten Cardinals to earn Buffalo’s first-ever conference title and sully the best season in Ball State history
The Old Wooden Mustache is a large, wooden mustache (three feet in length) with one side painted Buffalo blue and the other Ball State red.  The date and score of each contest is marked on the winning team’s side of the mustache with the winning squad earning the right to party like it’s 1889.
Share. Facebook Twitter Google+ LinkedIn Pinterest Email