The vast majority of theories on what happened to Malaysia Airlines Flight 370 sound insane. I’ve been looking for one that makes sense of it all… and I found it…. 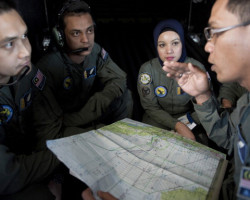 The vast majority of theories on what happened to Malaysia Airlines Flight 370 sound insane. I’ve been looking for one that makes sense of it all… and I found it. After reading the full text of this piece at wired.com, I’m ready to stop thinking about it and get on with my life.

It’s written by Chris Goodfellow, who has 20 years experience as a Canadian Class-1 instrumented-rated pilot for multi-engine planes– whatever that means.

When I heard this I immediately brought up Google Earth and searched for airports in proximity to the track toward the southwest.

The left turn is the key here. Zaharie Ahmad Shah was a very experienced senior captain with 18,000 hours of flight time. We old pilots were drilled to know what is the closest airport of safe harbor while in cruise. Airports behind us, airports abeam us, and airports ahead of us. They’re always in our head. Always. If something happens, you don’t want to be thinking about what are you going to do–you already know what you are going to do. When I saw that left turn with a direct heading, I instinctively knew he was heading for an airport. He was taking a direct route to Palau Langkawi, a 13,000-foot airstrip with an approach over water and no obstacles. The captain did not turn back to Kuala Lampur because he knew he had 8,000-foot ridges to cross. He knew the terrain was friendlier toward Langkawi, which also was closer.

Take a look at this airport on Google Earth. The pilot did all the right things. He was confronted by some major event onboard that made him make an immediate turn to the closest, safest airport.

Now take five minutes and go read the whole thing. Then you can get back to whatever is that you do.