Well well well Buffalo, here we are. We’re heading into Week 10 of the NFL season and the Bills are tied for the second best record in the entire AFC… 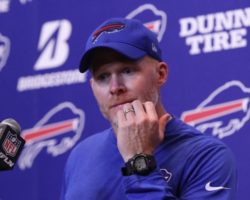 Well well well Buffalo, here we are. We’re heading into Week 10 of the NFL season and the Bills are tied for the second best record in the entire AFC at 6-2. This is a place that a vast majority of Bills fans have never been, including myself. We have seen multiple seasons start hot, who could forget the Trent Edwards 5-1 start in 2008?

But the one thing that we have grown accustomed to in the 21st century is colossal disasters after the great starts. Edwards gets concussed in Arizona during that ‘08 season and they only won three of their last eleven games. In 2011, Ryan Fitzpatrick got the team off to a 4-2 start, including a home win against the Patriots, and got a massive extension after the bye week. They won two of their last ten games after that.

With all those false gold seasons the Bills have had, they haven’t had a start quite like this. At 6-2, it marks their best start to a season since 1993. Now, let’s be fair, us Bills fans are always clamoring “SUPER BOWL!” at the start of every season. No matter what. But 2019 is the season that they have had the best chance at that goal since the 90’s. They have a light schedule, and the AFC is about as open and baron as Mars.

To get to the playoffs, and eventually the Super Bowl we first have to play out the rest of the season obviously. The Bills sit in a terrific spot half way through their games. They already have six wins and with how weak the conference is this year, 10 wins should be plenty to get them into the dance. Finding four more victories on their schedule is not hard to do. The next three games on Buffalo’s slate have a combined 6 victories.

They head to Cleveland in Week 10 to take on a Browns’ team that is in complete disarray. In Week 11, they go to Miami for their second game against the Dolphins. And Week 12 they’ll be facing either Brandon Allen or Drew Locke at QB in Denver. After that, you just have to beat either the Steelers or the Jets and you’re in. That’s all assuming for argument’s sake they lose to Dallas, Baltimore and New England.

Now that we have looked at the easy schedule and talked a bit about the Bills previous “failures”, it’s time to talk about the Bills in relation to betting on football during this season.

Look, here in Buffalo we all live off optimism, most times irrationally. The fact that we are only 1.5 games behind the Patriots going into Week 10 is kind of insanity. However, the loss to the Eagles really hindered the Bills chances at the division based on Vegas’ odds. They faded from an average of +900 to win the division to +1500 the 31-13 defeat.

New England has a bye week in Week 10, and then has some really challenging games after. The four weeks after their bye, they head to Philadelphia, then come home to play the Cowboys before heading to Houston and then finishing Week 14 at home against the Chiefs. That is a combined 22-13 record their up against.

The Eagles game seems like an easy win for the Patriots, as they have a 28-9 record since 2010 when they have a rest advantage. Even if they lose the next three, they finish the year against the Bengals, Bills and Dolphins. So at worst, they’re winning 12 games. While it’s easy to get the Bills to 10 wins, 12 is a little difficult.

So, yes, I’m ruling out the division. Even the most optimistic of us Bills fans know that you never bet against New England. MyBookie has the Patriots odds to win the division at -5000, meaning if you bet $100 on them to win the division you’d profit a total of $2. Despite a Tom Brady injury, or their defense just deciding to go on strike, the Pats will most likely head into the playoffs with a first-round bye.

That is just a super long way to say that even if the Bills win 11 games they’re going to be playing Wild Card Weekend on the road, presumably at either Baltimore or Houston. That’s based on the fact that both of those teams are the clear favorites to win their division according to Vegas.

There are two wild card spots and five teams within striking distance of the second spot. The good thing for the Bills is that they’re two games up on the cluster that is “in the hunt.” Pittsburgh, Oakland, Jacksonville, Tennessee and Los Angeles all have four wins so far this year. And to be quite frank there’s reason to be optimistic if you’re a fan of any of those teams.

Pittsburgh and Tennessee both look better with stable QB play in Mason Rudolph and Ryan Tannehill. Jacksonville is getting Nick Foles back. The Chargers have Melvin Gordon back and have won two straight games against solid NFC contender in Chicago and Green Bay. Oakland has been up and down this season, but just had a big win against Detroit. Derek Carr has settled in as well and has thrown only one interception in his last five games.

Of those teams, the Bills have already beaten the Titans and still play the Steelers this season. If the Raiders or Chargers are tied with the Bills, the Bills look to be in good shape on tie-breakers via division record. Jacksonville is the other team and they face the Colts twice this season still, who currently hold the second Wild Card– so they’ll beat up on each other.

It all seems to be lining up for another Buffalo Bills postseason, their second in the last three years. FootballOutsiders seem to agree as well, as they currently give the Bills a 59.2% chance to make the postseason.

Now what you have all came for. We went through the regular season, we got the Bills into the playoffs. So what are the chances we finally get the parade down Delaware Ave that we have been thirsting for? Well, if you ask Vegas it’s not great. And that should most likely be expected.

According to most sportsbooks, the Bills currently sit with +6333 odds to win the big one. That is good for fifth best in the AFC, behind the Patriots, Chiefs, Ravens and Texans respectively. FootballOutsiders have the Bills with a 3.3% chance to make the AFC Championship game, 0.7% to make the Super Bowl, and 0.2% to win it. Being the underdog is nothing we aren’t used to here in Buffalo.

When the oddsmakers set the lines for these future bets, such as winning the Super Bowl, they look at a multitude of things that you should know. They take into account offseason moves, coaching changes, and past on-field success among other things.

Certain teams, like the Patriots, will always be heavy favorites because they’re always in the mix. Looking at these lines on future bets can be a little intimidating at first. Right now on OddsShark, the Bills are listed +5000 to win the Super Bowl. That means, if you bet $100 on the Bills to win it all, you will pocket $5,100.

You get your original $100 back, plus $5,000 for picking the right winner. At 50/1 odds, with their defense and running game they certainly are worth a shot in the dark if you’re looking for value.