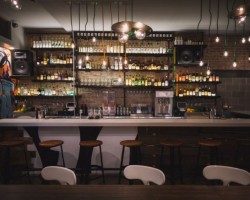 Lloyd Taco Trucks already has an excellent menu, so how does one create even more buzz for the grand opening of a brick and mortar restaurant? Hmm. Well, who likes chocolate? How about a lottery? Involving golden tickets? To a magical place full of tacos and beer? If this sounds like heaven, well…

I knew about @whereslloyd restaurant opening up, but it’s a bar too? Something that can’t get better got better.

I love it when a local kid food truck does good, and this marketing campaign was brilliant. And of course, congrats to everyone at Lloyd for their achievement. It’s a great addition to our already great lineup of restaurants. Everybody wins!

To learn more, check out the pics and the preview by Buffalo Eats.

In case you missed the news today, we’ve got the 1st look at @whereslloyd Taco Factory https://t.co/vOedqi7Ddk pic.twitter.com/TvgY4MSpNM

Smart Thing Two: The Successes Of The Fan Connection And The American Side Leave Movie Fans Wanting More

Two film productions with local ties (and recent smart things) “The Fan Connection” and “The American Side” both received full funding through their Kickstarter campaigns. Meanwhile, we were all treated to a real tear-jerker 30 for 30 flick on ESPN, “The Four Falls Of Buffalo.” It would seem we’re at our peak right now for film in this town. Or are we?

Mike Migliore put up a great post over at Buffalo Wins, musing over all of the other larger than life stories to come out of Buffalo that are sports documentary gold.

For those who haven’t seen it yet, here are the other Buffalo sports documentaries I’d create if I had the means. https://t.co/wfmW2wHvBh

No Goal. The Music City Miracle. Bob Kalsu. The Complete History of the Buffalo Braves. Those are a few of the titles he suggests in detail, but there’s a whole lot more, too. You’ll just have to pop on over and give it a read.

When you’re done, print it out and stick it in your back pocket. It’s the perfect tool to redirect the conversation around the holiday table when the whole Trump issue pops up.

My fondness for 26shirts has been well documented (to put it lightly) here on Smart Things. A similar project is now underway: Main & Allen has set its sights on the print and poster market, and is setting aside $5 a sale to help fund local schools.

Chris Keller is the inspiration behind the initiative, and took some time to chat and explain his goals.

“My goal is to make an impact on the educational lives of students. We’re using a platform called Donors Choose to find the teachers & classrooms. I’m in the process of setting up meetings with the Buffalo Teachers Federation in hopes to partner with them in some way.”

Part of the reason he is doing this is his own personal experience.

“My parents are both retired Buffalo public school teachers. I remember going with them when I was little to the teacher supply store and they had to use our own money to make sure their classrooms had enough supplies for the students.”

“I really hope to make an impact and help the public schools here. Getting the next generation educated is huge for our area.”

I couldn’t agree more. Head on over to Main & Allen’s site via the link above, and make sure to give Chris a follow:

More beer, anyone? Sure! My City Brew a new Kickstarter campaign that you might want to back:

Wow. This image of pure joy is an impossible act to follow, so it’s best I close up Smart Things right here.

Yet another great reaction from a young fan watching @BuffaloSabres head to the ice last night. pic.twitter.com/1JMztQN05h

Enjoy the holidays – and drive safe, everybody.

Note: Questions? Comments? Have a Smart Thing? You can find Scott Michalak adding to his Lloyd coin jar at @ScottyMCSS.