This is important, and it’s real. Buffalo: for real. 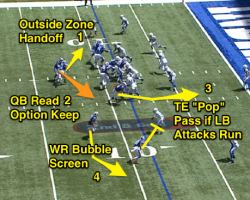 Hey, that EJ Manuel pick is starting to look pretty smart. (Sure, he’s sidelined for a bit with that minor knee thingy, but all signs point towards a quick learning, physically gifted leader as our new signal caller.) Love how he can run that no-huddle, and move his team down the field so quickly.

Can we be done with “circle the wagons” now? Let’s put those years behind us.

1. The Bills look Great as a Package

“Packaged plays” give the quarterback the option to run or pass the ball in a myriad of ways, on any given snap. The designs of each option are simple, so it’s easy for the offense to click on what the QB decides is the smart play to run at the line. For the defense, packaged plays are a nightmare: players have just moments to try and prepare for, well, anything and everything that can happen when the ball is snapped. In short, the offense has plenty of options, while minimizing mistakes. It’s up to the defense to try to minimize mistakes, while expecting all of the options.

Here’s a gem on packaged plays from Grantland.com (do yourself a favor, and bookmark this site):

“Consider a series from Ole Miss’s bowl game last season, under first-year coach Hugh Freeze. Until recently, Freeze was probably most famous as the high school coach from the book and movie The Blind Side, but with his team’s surprising success last year, he’s beginning to earn a reputation as an innovator. The official play-by-play description for the touchdown drive looks a lot like the description for any number of similarly successful drives:

That description seemingly represented what everyone watching the game saw — Ole Miss kept Pittsburgh’s defense off-balance with a mix of plays that resulted in a quick, efficient scoring drive.

Except that wasn’t the case at all. Ole Miss did not choose five different plays to keep the defense confused. Instead, they ran the same play five times in a row. That play simply had four different options — ones that resulted in two different ball carries and two different receivers touching the ball.”

This collegiate concept translates well to the NFL gridiron:

“I’m not sure how good Marrone and Hackett’s offense in Buffalo will be, but they may have won the award for one of the niftiest plays I’ve seen. Against the Colts in their preseason opener, the Bills ran a four-in-one play that included a read-option concept for the quarterback to hand off to the runner or keep it himself, throw a bubble screen, and have the option of throwing a quick “pop” pass to the tight end if the linebackers to his side crashed for the run — yet another counter to the plans defenses have been creating all season to handle the read-option.” 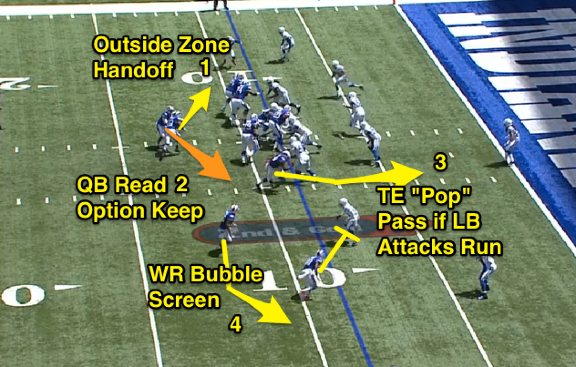 “If the concern with these plays is whether the quarterbacks can consistently make the right decision on a play with four options, both of the Bills rookie quarterbacks, first-rounder EJ Manuel as well as undrafted free agent Jeff Tuel, executed this play multiple times and read it correctly each time. And this is what makes these plays so effective. Although this play has four different options, all of them are, well, easy, especially if the offense is rolling along in the no-huddle and the defense is forced into base looks.”

Want to be the smart dude at the football party this year? When the person next to you says “They’re lining up for the run,” arch an eyebrow, and reply, “No. They are lining up for everything.” Keep doing this. You will be a football god. (Unless your buddies read Smart Things/Grantland…)

2. Center for Arts and Tech Targets the Un/underemployed

We need the arts in schools. We also need more jobs. If only we could do something in this town to ease both of these problems. No one thing will solve our education/job woes, but every little effort makes a difference. In one punch, the Center for Arts and Tech hits both right on the nose. From Buffalo Business First:

“Construction has started on the Buffalo Center for Arts and Technology, which may serve as a key anchor in Main Street’s Artspace project.

…The center’s programming is a mix of after-school arts-based lessons and activities for at-risk urban students and health-career training classes for the underemployed and unemployed. Classes are slated to start in October with health-sciences career courses in pharmacy tech and medical coding coming once all New York state licensing is completed.”

There’s been plenty of dissent about building the waterfront, while the rest of the city remains stuck in the same old rust belt deadland.

This center will make a difference.

Again, we’ll need more, but this thing is important, and it’s real. Buffalo: for real.

3. The Biggest Beers in Forty Years

We were always a brewing town. Then we weren’t. Now, we are again – and one kickstarter aims to build something we haven’t seen the likes of “for forty years:”

Those taps are gorgeous.

Note: “3 Smartest Things” is being produced to go along with the “5 Dumbest Things” series here on TB. “Why three,” you ask? Well – far be it from me to break our time honored tradition of berating each other on the progress of our fair Queen City. Tell you what, when the new Peace Bridge goes up, we’ll go up to five. And of course, feel free to follow me on Twitter to discuss all things trending in Buffalo when you’re bored at work. Your boss will appreciate your increased productivity afterwards.