The nice thing about Buffalo is, if you want to have a beer with someone, there’s never a shortage of people in bars. We all have drinking buddies, drinking acquaintances,… 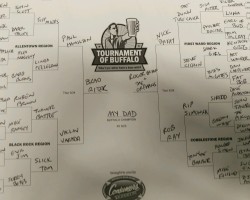 Handicapping the Tournament of Buffalo

The nice thing about Buffalo is, if you want to have a beer with someone, there’s never a shortage of people in bars. We all have drinking buddies, drinking acquaintances, drinking enemies and drinking lovers, but then there’s that upper echelon of drinkers. Your friends probably have stories about the time they were in a bar and [insert name] walked in and told a story about [insert interesting thing]. Then, another friend tells his drinking story. When it’s your turn, you don’t have a story because you’ve never had a beer with a local celebrity.

Well, Trending Buffalo is graciously letting you ask yourself, “Who would that celebrity be if it could be?” with the Tournament of Buffalo!

This field is stacked with people I’d have a beer with. There are also some people on the bracket that I have had a beer with, so this article comes with tons of wisdom and stuff. When I look at this field and fill out my bracket, I’m choosing the person I feel would be the most interesting, genial, wise, funny or passionate. If they’re attractive that doesn’t hurt, but that’s not what this tournament is about.

Let’s take a look at each region and predict some winners. These are my predictions, not necessarily who I’d pick.

Schopp can drink/conversate with the best of them, but I can’t see him getting past Eric Wood in the second round. Maryalice Demler will come up just short in votes against a very topical and interesting Evander Kane in Rd. 2. The Kim Pegula/Khalil Mack match-up is one to watch. If a Pegula V. Pegula matchup does happen in Rd. 2, I’d expect Kim to win because the public might be more curious about her? It doesn’t matter because RJ cruises through the bottom bracket, upsets Eric Wood and steals Allentown. “Are you ready Region of Doom???”

I don’t know who Darius Pridgen is. I’m sorry. I don’t really read the paper. I’m terrible. I guess he loses Rd. 1 to Paul Cambria? It’s a close matchup, but Thurman takes down Rex in Rd. 2. Lauren Hall is one of my favorite Buffalonians, but she’ll have a tough time against a Sabre legend in Danny Gare, same goes for Bull and the ROR draw. Bull, you can have a beer with me after the game.

The Bedenko V. Esmonde blood match is the highlight of Rd. 1. Alan prevails, but his victory is short-lived. Takac and Bulldog are probably having a beer together as I type this, so neither will mind losing. Everyone here is a Division II team with Thurman the runaway winner. Note to voters: If you have a beer with Bulldog, he can tell you the best Thurman Thomas/Bulldog story of all time.

A lot of scuttlebutt on the Facebooks about Mike Robitaille being a 1 seed. This guy has better stories than Steven King, the writer, who also has good stores. Bills builder Bill Polian, internet hero Tim Graham and one of the best players in NHL history, Pat Kane, also highlight this bracket.

I think Buffalo will push Ryan Fitzpatrick into the third round. People have wanted to have a beer with him since his first season as a soul-crushing interception thrower. Graham takes down Conehead, a guy who has served him several beers over the years. Marcell Dareus beats out Polian in Rd. 2. After Brandon beats Quinn, he falls to Roby. When the smoke clears, I think Kane will steal this region from Fitz.

So, Trending Buffalo put a bunch of other people in a region with Jim Kelly? This should end well for those other people. There are some real gems in this region. I have always wanted to have a beer with Keith Radford. Sully, Harrington, Marty and Ragan are all reasons why people go to bars to have conversations with people.

The Whaley Ragan match-up is interesting. New kid in town with lots of cool Bills stories versus one of our all-time favorites. I see Ragan getting Edge support and winning. Poor Nalina Shapiro. She seems super cool, but that’s #12 across the court. LeSean McCoy skates past Heather LY, but loses to his GM. Marty beats Tasker in a battle of nice guys. Tim Murray can take some pleasure in bringing down Sully in Rd. 2. Murray and Kelly will meet in the semis. If Jim Kelly loses this region, I’ll drink alone in my basement for an entire weekend. Note to voters: I’d do that anyway.

A pair of 7 seeds took two very different paths to get a point where most, if not all, of Buffalo would want to have a beer with them. RJ is a HOF broadcaster while Thurman is a HOF running back. Who would Buffalo rather have a beer with? My guess is that it will be a close race, but Bills Mafia hashtags will take over and push #34 to the top.

Two different generations of Buffalo fame square off. You’d think that more younger people use the internet, so Kane is a shoe-in, but older people have nothing better to do than to vote on Trending Buffalo Twitter tournaments. Plus, even people who have never seen Jim Kelly play know the legend. They’ll want to hear the stories of Bills greatness and ChatterSnap their chance encounter with a mythical being to make their friends jealous. Kelly wins, and I don’t think it’ll be that close.

It should be Thurman v. Kelly, right? This will be fun if it happens. While Thurman is active on Twitter and has plenty of pull, I think even he’ll vote for Kelly. I’m no expert on this city, but I can see how this thing plays out clearly. I’m picking Jim Kelly to win it all. 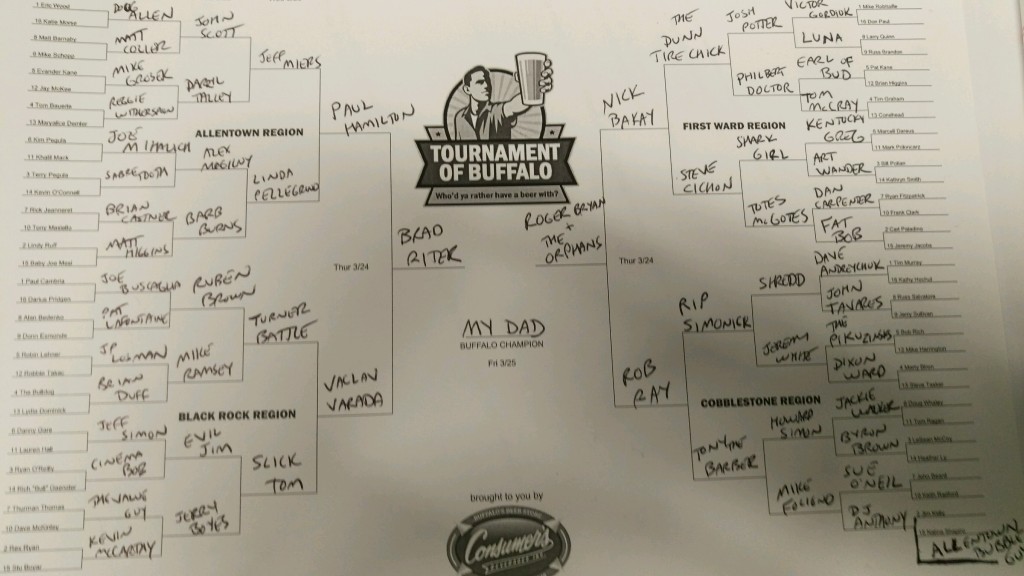