The Buffalo Bills were established on October 28, 1959 and began playing as a part of the AFL in 1960. Ten years later, they joined the NFL with the AFL… 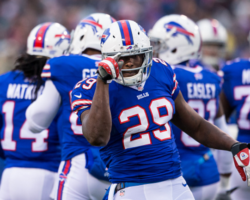 A Closer Look at the Buffalo Bills

The Buffalo Bills were established on October 28, 1959 and began playing as a part of the AFL in 1960. Ten years later, they joined the NFL with the AFL – NFL merger and became the only team to win 4 consecutive conference championships.

As of today, the team is competing in the American Football Conference East Division. The team’s playoff record is 14 wins and 16 losses. The team is not in their best form these days and there are some complications now and then, but they are still a formidable opponent.

While we are taking a close look at Buffalo Bills, let’s check out some of the biggest favorites to win the divisions, as well as the team that is most likely to be the winner of the Super Bowl LIV. Firstly, the Patriots are the favorites to win the AFC. Their odds are +300. Right behind them, we got the Kansas City Chiefs and the Los Angeles Chargers. Chiefs’ odds are +375, and the LA Chargers have odds sitting at +700.

Los Angeles Rams are the number 1 favorites to win the NFC. Their odds are +450. The top 3 list is concluded with the New Orleans Saints and the Philadelphia Eagles. The Saints’ odds are the same as the Rams’ and the Eagles’ odds are +800. Online bookies have a lot of bonuses and promotions in store for the NFL. That is why we advise you to look for the best bookies that offer the best NFL betting odds before choosing your favorite. That way, you can maximize your profits and use all of the promotions to your advantage.

Before we head over to Buffalo Bills, it is important to mention the favorites for the next Super Bowl. New England Patriots and Kansas City Chiefs are the top 2 favorites to win it. Patriots’ odds are +450 while the Chiefs’ odds are +800. Two more franchises are most likely to win the Super Bowl LIV. The New Orleans Saints and the Los Angeles Rams are rounding the top 4 list. Saints’ odds are +1000 and the Rams’ odds are +1100.

Now that we have seen all the conference and Super Bowl favorites, let’s head back to the Bills and take a look at their rivalries, accomplishments, and more.

Bills’ most notable rivals are the Miami Dolphins, New England Patriots, and the New York Jets. The Bills – Dolphins rivalry is their most famous rivalry. After the Dolphins started playing in the NFL as an expansion team since 1966, the two franchises have fierce competition between themselves. Miami leads the overall score though, 61-48-1.

The New England Patriots rivalry started before the NFL – AFL merger. Both teams were part of the AFL and the rivalry has grown in recent years because the Patriots have been a bit more successful than the Bills and they have been winning the recent games between each other. And lastly, The Jets are also a franchise that represents the state of New York. But, unlike the two previous rivalries, these two franchises are not that harsh, since this rivalry represents the difference between New York City and Upstate New York.

Buffalo Bills also had 18 playoff appearances, 4 in the AFL and 14 in the NFL. Their most recent one was in 2017 but came in second behind the Patriots.

Some of the players that have managed to be named in the Hall of Fame are Billy Shaw, Jim Kelly, Thurman Thomas, Bruce Smith, James Lofton Andre Reed, and Terrell Owens. There are some coaches and executives on this list as well – Marv Lev, Ralph Wilson, and Bill Polian have also been inducted into the Hall of Fame.