View image | gettyimages.com   Bills fans know who Frank Reich is a little better than Adam Gase, but with the Orchestrator of the Greatest Comeback in NFL history now… 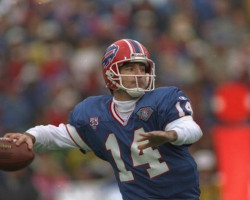 CoachWatch2015: A man who needs no introduction

Bills fans know who Frank Reich is a little better than Adam Gase, but with the Orchestrator of the Greatest Comeback in NFL history now a legitimate head-coaching candidate in Buffalo, it’s time to learn about his coaching acumen and background.

I reached out to, I think, the smartest, most football-savvy Chargers follow on Twitter, Kyle Posey, who writes and podcasts for SB Nation’s Chargers blog, Bolts From The Blue, to gather some insight on San Diego’s offensive coordinator.

1. To the best of your knowledge, explain Frank Reich’s general offensive philosophy and/or scheme. Did he show a willingness to adapt to the talent provided to him at key positions?

Posey: The biggest difference in Reich’s philosophy from Wisenhunt’s a year ago was that Wisenhunt called plays that benefited the offense, while protecting the defense. He’d run the ball, feature short passes, to keep the team in 3rd and manageable for his quarterback to convert. Reich is more of a gambler and liked to take deep shots. The risk with this is there isn’t a “great” deep threat option on the team and the offensive line isn’t built to hold up in pass protection for these long developing route concepts.

That led to 2nd and long and that’s where the lack of run diversity came in, putting Rivers in a bind to make a play on 3rd and long. I don’t think he did a good job of adapting to the talent provided. Another year passed where Ladarius Green was invisible and it took over half the season to find out that certain players can’t do certain things. Unacceptable.

2. Obviously, Reich is in a fantastic position as Rivers’ offensive coordinator, so it’s easy for some to assume he’s just riding Rivers’ coattails. What about his coaching makes him a good head coach candidate? What are some potential negatives?

Posey: I think Reich will be a great head coach. He’s seems very personable, and can take control of the room. I can see players wanting to play for him. I also think his aggressive tendencies as a play caller will pay off when it comes to making relatively easy decisions that so many head coaches tend to mess up on, like going for it on 4th and 1.

The only negative thing you’d worry about is if the stage would be too big for him and there would be too much responsibility for him. I don’t see that being an issue.

3. Was there ever fan or media gripes about Reich not getting the most out of the offensive talent on the Chargers roster?

Posey: There definitely was. It started early on when Reich didn’t show any adjustments to Arizona’s blitzes. Things got better when the Chargers played cupcakes but the issues resurfaced when they started playing playoff teams. It seems that without Ryan Mathews, Reich got away from any run game creativity.

I also wonder what he thought teams would do to Keenan Allen this year? He had a whole year to game plan for teams rolling their coverage toward Allen, and there were no adjustments made to get other players involved. Many fans gave him a pass for injuries but I don’t feel that way because injuries happen to every team.

4. Who do you think Reich’s biggest coaching influences have been? Did the offensive scheme / play-calling change much from Whiz to Reich this season? Did the offense have a good run-pass balance?

Posey: Had to tell who Reich’s influences have been. I believe it’s been a mix of everywhere he’s worked and his own experiences. He’s worked with great quarterbacks so that certainly has helped. More downfield passes, which led to the offense being less efficient was the biggest change.

The numbers don’t totally reflect this, but it’s obvious that the offense took a step back, but that was expected. The offense averaged 5 less rush attempts per game this year and nearly a full yard less per attempt. Rivers averaged 3 more attempts this year, but 1 less completion per game. The ratio wasn’t bad, but the situational play calling was.

5. The Bills are, essentially, a semi-competent QB away from being a scary playoff team, and EJ Manuel’s still on the roster. Do you think Reich has the knowledge to be a good teacher of the quarterback position / help Manuel’s development?

Posey: I think Reich is very smart and can really help Manuel/whoever they bring in sans Cutler. Actually, his downfield shots might suit Cutler better. But I think his understanding of the position combined with his experience and ability to control the room will fit great with the quarterback of the Bills.