Tonight, the Buffalo Sabres will honor the “Dominator” and officially retire goaltender Dominik Hasek’s #39 jersey.  Many Sabres fans may not realize just how dominant the Dominator was. Below is… 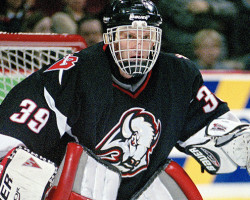 5 Reasons Why Dominik Hasek is the Greatest Goaltender Ever

Tonight, the Buffalo Sabres will honor the “Dominator” and officially retire goaltender Dominik Hasek’s #39 jersey.  Many Sabres fans may not realize just how dominant the Dominator was.

Below is an excerpt from and article posted by The Hockey News outlining why they think Hasek is the best of all-time.

1 – His major hardware collection is the closest thing goalies have to Wayne Gretzky’s and Bobby Orr’s.

The only goaltender with more Vezina Trophies than Hasek’s six is Plante, who had seven and won six of those playing in a league with six teams and six starting goaltenders. The NHL had 26 teams when Hasek won his first Vezina and 30 when he earned his sixth. Plante also won all his Vezinas when the award went to the starting goalie of the team with the lowest goals-against average, so Hasek has the most Vezinas under the “real” system, in which GMs vote on the league’s best goalie.

Hasek won a hilarious, ridiculous five Vezinas in a six-year stretch at one point in his career. He’s the only goalie to win the Hart Trophy as league MVP twice, which he did over back-to-back seasons in 1996-97 and 1997-98. In both of those memorable campaigns, he won the Ted Lindsay Award, chosen by the players as MVP. Mike Liut is the only other goalie to win the Lindsay. Hasek is a six-time first-team All-Star. He won two Cups with Detroit (one as the starter) and, before that, got to the final by dragging along a Buffalo team that boasted Mike Peca, Miroslav Satan and Jason Woolley as its best players. His .922 career save percentage is No. 1 in NHL history. Did he play a big chunk of his career in the Dead Puck Era, or is it more accurate to say he was the Dead Puck Era?

2 – His numbers stack up to Roy’s and Brodeur’s well considering he wasn’t a starter in the NHL until 28.

Plenty will disagree over naming Hasek the best ever. Some folks will champion Plante, others Sawchuk, some Glenn Hall, and others still may point to the amazing and short careers of Ken Dryden and Bill Durnan. The most vehement Hasek opposers, of course, will tout Roy or Brodeur as a better choice for the greatest ever. But is it fair to do so without factoring in the age at which Hasek got his chance in the NHL?

The Chicago Blackhawks drafted him in 1983, in the days when the Iron Curtain made it unlikely for Czech players to make the trek to the NHL. Hasek, a 10th-round pick, didn’t even know he was drafted until months later. When he finally reached North America, he was stuck behind some guy named Ed Belfour in the Hawks organization. He wound up traded to the Buffalo Sabres and even then didn’t get the starter’s reins until 1993-94. He was 28.

By the time Roy turned 28, he’d won two of his four Stanley Cups, two of his three Conn Smythes and all three of his Vezinas. He’d earned 225 of his 551 victories.

So, comparing the three if they became starters at age 28:

By no means is that a perfect argument. We can’t take away from how good Roy and Brodeur were at young ages and there’s no guarantee Hasek would’ve been in peak form that early. I’m simply illustrating why I don’t buy the argument that “Hasek can’t even touch Roy’s and Brodeurs wins and playoff success” when they did so much damage at an age when Hasek wasn’t in the league yet. Hasek is to the “volume stats” as Ichiro Suzuki is to Pete Rose’s hits record.

3 – He’s every bit the innovator Roy and Plante were.

Those who back Roy or Plante as the best ever may do so on the grounds that those two were innovators, like Orr and Gretzky at their respective positions. Plante pioneered the mask and leaving the net to play the puck, while Roy popularized the butterfly style. But Hasek was an innovator, too. He invented his own, reactive, “floppy” style of goaltending, slithering around the crease, down but never out. It looked lucky, but it was organized chaos. He would run scramble drills in practice. He would drop his stick in the crease to cover the bottom of the net. He played the position like none before him:

4 – He was a superstar not just in the NHL, but internationally.

If hockey lore was weighted entirely toward NHL success, no one would know who Vladislav Tretiak is. International success matters, and Hasek carried his country to the gold medal in 1998 in the first Olympic tournament to feature NHLers. He was the best in best-on-best action. Brodeur won gold as Canada’s starter in 2002, posting a 1.80 GAA and .917 SP, but half that team is in the Hall of Fame now. Hasek took his nation on his back in 1998, posting a 0.97 GAA and .961 SP for the tournament. Incredible.

5 – He demoralized opponents like no goalie before or after him.

If you’re Canadian, relive Brendan Shanahan’s last shootout attempt in Canada’s elimination loss to the Czechs in ’98. We knew it and we heard it in Bob Cole’s voice: Shanahan was not scoring. Hasek took over a game and got into his opponents heads like no other goalie could during his prime years. Watch the 1998 shootout here (in Czech. Couldn’t find the Canadian feed, sorry. But maybe it’s more interesting in Czech?) 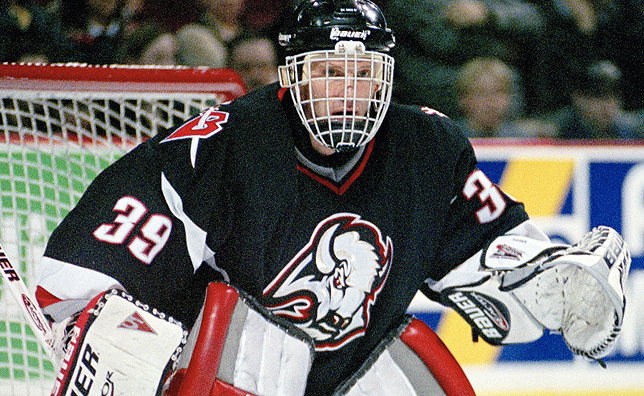