It’s the biggest football game in OP since… ? 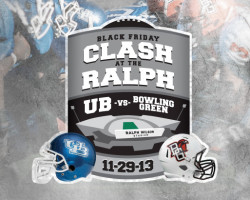 UB’s “Clash at the Ralph” Is A Playoff Game

Actually, the headline SHOULD read:

With Tuesday night’s 30-3 win over the Ohio Bobcats, the UB Bulls have ensured that they’ll head into the season finale “Clash at the Ralph” against Bowling Green with a chance to wrap up the MAC East… if they haven’t wrapped it up already. The winner of the division will play in the MAC Championship Game on December 6th at Ford Field in Detroit.

UB’s Branden Oliver has rushed for 650 yards and 7 TDs over his last 3 games.

To simplify– if the Bulls beat Bowling Green, they win the MAC East— regardless of what happens in any of the games played between now and then. I’m a little disappointed that I didn’t realize this while hosting Tuesday night’s postgame show but here are the standings, the remaining schedule for each team still alive for the divisional crown, and an brief explanation. 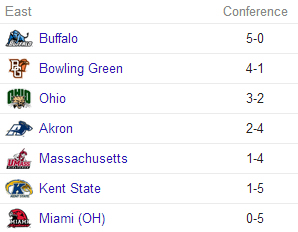 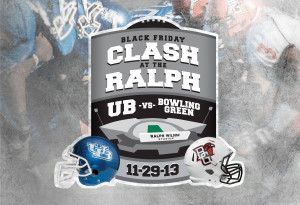 None of the above counts for the likelihood of any of the different scenarios. It’s just math.

Bottom line– if you purchase a ticket for the Clash at the Ralph, you’ll either witness a “playoff” game the Bulls can win to move onto the title game or you’ll be there to send off the already-crowned MAC East Champions to Detroit.