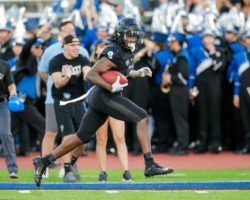 On today’s TB podcast, Scott Wilson and I look back at UB’s home win over Eastern Michigan and preview a possible “trap game” on the road against Rutgers.

Here are a couple of links referenced within the podcast, and one that wasn’t.

ICYMI: #WeeklyWeapons for some of the best performances from Week 3. pic.twitter.com/gOl1CxEkSC

CBS: Tyree Jackson — one of the saviors of the deep ball in the NFL

And here’s how to watch Saturday’s game:

Saturday’s University at Buffalo football game at Rutgers will air on one of the Big Ten Network channels. To find out where it is airing in your area, click here. Fans can also watch the game on the BTN2Go App.

Where to watch the game in the Buffalo area: