With veganism on the rise in America, Buffalo has been ranked the 16th most friendly vegan city in the country. The number of U.S citizens who have adopted a vegan… 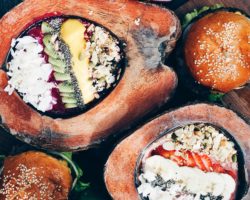 Buffalo’s First Plant Based Restaurant Is Right On Trend

With veganism on the rise in America, Buffalo has been ranked the 16th most friendly vegan city in the country. The number of U.S citizens who have adopted a vegan diet has increased by an impressive 600% in the past three years, according to the Top Trends in Prepared Foods in 2017 report. Therefore, a whole new foundation of dining experiences in Buffalo have started to crop up. But, it’s Buffalo’s first and only entirely plant-based restaurant which is really changing the way vegans in the city eat.

It was only in May that The Root & Bloom opened up for the first time. Since then, husband and wife duo, James Ernst and Sarah Sendlbeck, have been catering for up to 50 diners in a large wooden gazebo located behind 423 Elmwood Drive. However, the one-of-a-kind vegan restaurant will be moving inside into vegan chocolate shop ‘Thinking Elvish’s’ former premises, now that the colder weather is here.

Getting up and running

But it’s taken time for the couple to get their their vegan hospitality venture off the ground. The idea first took hold back in June 2016. Between then and February of this year, Ernst and Sendlbeck held eight pop up dinners in the city to ensure there was a market for their vegan delights. Sarah recalls the beginning of The Root & Bloom’s journey: “These were ‘underground’ ticketed dinners, and people wouldn’t know where they were going until the day.” Thankfully, demand in Buffalo was high and the couple were catering for up to 40 people each night.

There’s a misconception that vegan diets are a fad and that the food is plain and boring. However, research has revealed that 69% of vegans opt for such a diet due to health reasons, while 52% prefer the taste. Therefore, The Root & Bloom have ensured that Buffalo’s vegan and non-vegan residents can enjoy good food regardless of their diet preference. Every third Saturday the restaurant offer a guilty pleasure menu which prioritizes great taste over nutritional value. On the menu on these Saturdays are vegan fried chicken and waffles and cheesesteaks. Ernst states this is the best opportunity to dine with non-vegan family and friends. “If you want to bring your aunt or your cousin in who’s never had vegan food before, these are the menu options we don’t advise eating on a regular basis, but we indulge in from time to time,” he states.

As Buffalo’s average daily temperature in October falls by as much as 11 degrees, Ernst and Sendlbeck have no option but to vacate their beloved outdoor wooden gazebo and move indoors. However, the couple will have to work in a smaller kitchen and face accommodating just 36 diners at a time. But, Ernst isn’t fazed by this prospect, stating, “the mission will remain the same.” This is just the positive attitude which this top restaurant hospitality group in Arizona promotes. They state ‘evolving the typical restaurant landscape into a one which provides unique and meaningful experiences for each and every guest’ is one of the most important aspects of the hospitality industry.

Buffalo proudly ranks high in the most vegan friendly cities in America. And, it’s the likes of innovative hospitality businesses such as The Root & Bloom who are providing locals with new food choices regardless of whether they follow a strict vegan diet or not.