Dollar Tree is the simplest store in America. Unlike the liars at Family Dollar and Dollar General, Dollar Tree offers no items above the cost of a single American greenback…. 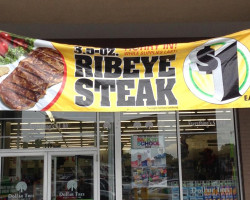 Dollar Tree is the simplest store in America. Unlike the liars at Family Dollar and Dollar General, Dollar Tree offers no items above the cost of a single American greenback.

Need dish soap, a chew toy for your dog, and a toilet brush? Three bucks and you’re on your way. Thanks, Dollar Tree.

Hungry, too? Well, we’ve got some great news for you! 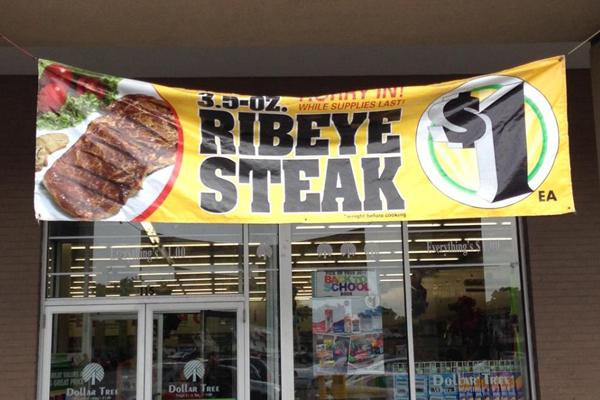 Damn right you’d better HURRY IN! Supplies won’t last long when everyone finds out about DOLLAR STEAK… assuming that the guy who hung the sign didn’t buy them all up himself. 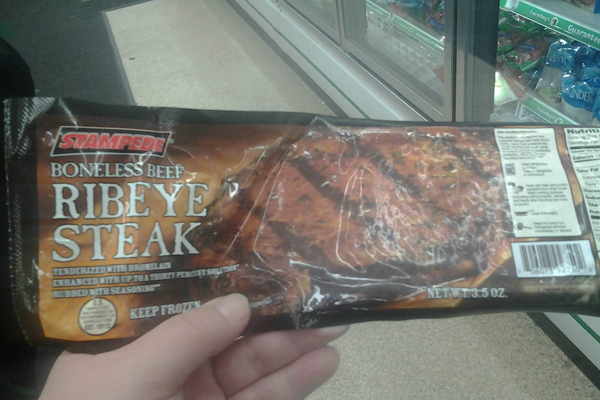 There it is! It’s a Stampede brand boneless beef ribeye steak. Like all good food, it’s tenderized with bromelain.

Bromelain is a protein extract derived from the stems of pineapples, although it exists in all parts of the fresh plant and fruit. The extract has a history of folk medicine use.

It’s also “enhanced with up to a thirty percent solution.” Of what? Who cares? DOLLAR STEAK! 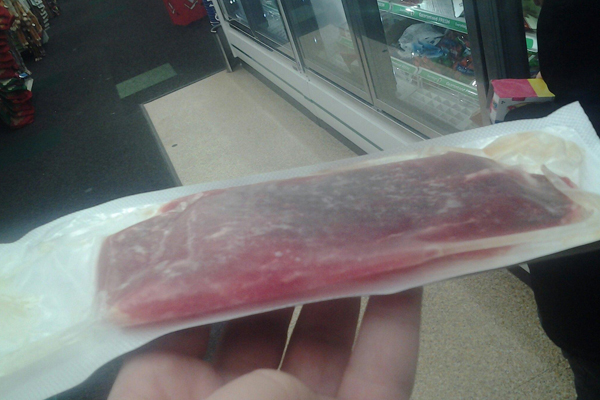 Look at that baby! What a steal! Has Dollar Tree lost its mind?

Bewildering. So for starters, thawing the $1 Ribeye came with its own surprise in that the bottom 60% of it, unseen due to the packaging, was a block of ice. As I cut the packaging open and tried to pull the “steak” out it almost ripped in half. The delicate nature in dealing with this steak reminded me of the Japanese Kobe beef steak – cows massaged by human hand for years in the field to tenderize the meat, and then only women were allowed to prepare the highly prized marbled steak due to belief that men couldn’t be delicate or careful enough. The similarity would certainly end well before that thought occurred though. Where one Kobe steak at the most highly sought after eatery in Japan may demand a whopping $600, it would take 600 of these Ribeyes to compare. With six hundred Dollar Tree Ribeyes, you could in theory have enough to recreate the old mule they came from.

Hmmmn…what to say about the appearance…I believed that it probably was meat, albeit semi-transparent malnourished animal meat. My initial thought in preparing the specimen was to sear the meat then bake it afterwards a la Ruth Chris Steak house, with coarse salt and a buttery glaze on top. But, it became glaringly obvious that it would probably evaporate in the oven. So just searing each side long enough to get a spatula under it produced a browning effect which I, by faith, declared cooked. The petite anorexic cut as shown in the picture to be slimmer than 3 pennies high made me wonder why I got out a steak knife. 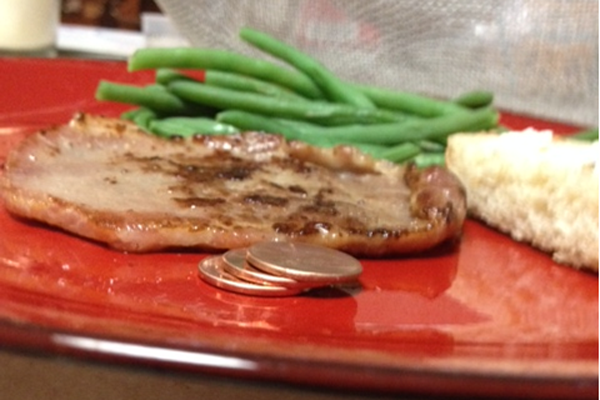 Ah – the taste. With the first bite came the question: ‘What chemical do I think that is?” The parts that had been salted well, tasted decent…the salt part not the meat. The steak itself was rubbery and bland like tougher tofu. It did have an aftertaste that convinced me to think the poor animal this came from must have been really sweaty. I did manage to finish the steak in no time at all and surprisingly didn’t experience any cramping, ulcers, explosive diarrhea, gas with oily discharge, hallucinations, menopause or juvenile diabetes. And although I did sleep soundly, I admittedly enlisted the help of my faithful friend Dr. Nyquil.

Do you get what you pay for? Sure enough, but my prediction is that these perplexing Ribeyes may be going on sale, so don’t run out to the Dollar Tree just yet.

Editor’s note: The reviews of Eric’s review are mixed but we liked this one. Thanks, bigsmellypenis!