Before we begin, I’m going to tell you right now that I didn’t recap last week and I’m never going to. My wife and I went on vacation and I… 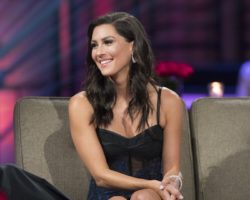 Before we begin, I’m going to tell you right now that I didn’t recap last week and I’m never going to. My wife and I went on vacation and I don’t have it in me to watch four hours tonight. Our Buffalo guy had sex with Becca and then got dumped. It happened in a tropical location. There was a lot of crying. I hear Jason handled himself well enough to make himself a contender to be the next Bachelor. It doesn’t matter because I’m not going to recap next season. I’ve got two episodes to go for the rest of my life. Find some other sick way of amusing yourself.

Tonight, it’s the worst episode of the season. The men will tell all in front of an audience of 199 cat owners and one man. I’ll watch it while my eyes and ears bleed. I hate this show so much. It’s ‘The Bachelorette’.

Chris Harrison calls this “a very special edition of the Bachelorette.” If you’re new to the show, “very special” means that a bunch of guys yell at the same time about stupid things, then ABC plays bloopers. Also, Chris Harrison nods like a mother fucker. The stage is set for Jordan and David to settle unsettled business. Colton is going to talk about being a virgin. It’s going to be epic.

We begin with a preview of ‘Bachelor in Paradise’, which is the television equivalent of a boa constrictor crawling through your plumbing and up into your colon while you do your bathroom stuff. It’s uncomfortable and unnecessary. With dramatic music and editing, ABC makes it seem like this show is responsible for keeping the earth on its axis.

Next comes the studio audience parts. Cat owners scream as Chris Harrison introduces the boyfriends worthy of one last television appearance. The cat owners cheer especially loud for Grocery Joe, who I do not remember at all. Jason from Buffalo gets a lot of cheers too, which is good for his future Bachelor prospects.

Then, because they don’t know how to create content, ABC plays a bunch of footage of stuff we’ve already seen from the season. I thought the men where supposed to be telling all? How can we hear all when we’re just watching stuff we already knew? This isn’t all, this is that. We knew that, we need all! Tell us all, ABC! The men are just sitting there not telling all. I need to know the gross national product of Uruguay!

We’re back to the men telling all, finally. The men yell at Chris for having feelings. Then, Jean Blanc addresses how he told Becca he loved her and then took his love back. Colton fires a cheap shot at Jean Blanc and Jean Blanc makes fun of him for being a virgin. So, if you’re keeping track at home, it took 18 minutes for someone to bring up Colton’s virginity.

Chris Harrison brings up Jordan and his terribleness, giving the other boyfriends a chance to yell at Jordan. Jordan is attacked and goes on a fantastic rant that makes absolutely no sense. Jordan says, “This house revolved around me. I’m the mouse, they’re the elephant. They’re constantly going to think about me for the next ten years. Where did he come from? I’ve got billboards up in all their minds. I should have worn a work vest.” I wish all of that was my yearbook quote. 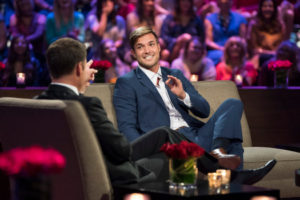 For the next ten minutes, every time someone tries to talk, Jordan butts in and screams about how much of a man he is. Villains gotta vil.

David tries to attack Jordan, but everyone gangs up on him. For some reason, the guys all hate David more than they hate Jordan. I find it impossible to hate anything more than I hate Jordan but they’re doing it. Trying to decide between hating Jordan or David is like trying to decide between hating someone who beats a dog and someone who steals money from charities.

Someone I don’t know yells at Jordan about being a model and another model jumps in and then every sound is just bleeped out for 4 minutes. The men can’t tell all if all is being bleeped out. You can’t bleep out all. “All” only occurs without censorship. Stop bleeping all, ABC! This isn’t good television. The cat must owners love it because they’re going nuts!

Next, ABC shows annoying footage of Jordan’s journey. We’ve already seen it, but we see it again. No one is telling all. Chris Harrison brings Jordan up into the hot seat because we haven’t heard enough screaming. Jordan says that he likes to have fun and the guys couldn’t take it. Jordan says that he’s just being himself. Ever notice that the only people who are ever adamant about being themselves are complete assholes? Anyway, ABC lawyers tase Chris Harrison to make him mention the gold underwear and he mentions the golden underwear and Jordan shows us all that he’s wearing the golden underwear. I hate this show.

Wills is next on the hot seat. Wills is the guy who wore a leopard jumper this season. That’s about all I remember about him. ABC shows Wills’ journey because they’re incapable of producing content. Wills told Becca that he loved her and then Becca dumped him. That would be a blow to one’s confidence. Wills’ footage recap is super tough to watch. The cat owners all gasp at the shattering of Wills’ innocence. You guys gasped at the shattering of Wills’ innocence too, admit it!

The virgin Colton is next in the hot seat. I hope Bachelorette interns cooled the hot seat down a bit before Colton sat down in it, because virgins don’t respond well to heat. Before Colton can tell all, ABC plays back his virgin journey. We watch it. Again. It happens. It’s not any better to watch the second time.

The cat owners clap for Colton the virgin. Many of them scream things. They want to make it so Colton is no longer a virgin. Some of the cat owners probably prefer Colton to their cats.

Next, our local boy Jason gets the spotlight. Jason sits in the hot seat so Chris Harrison can ask him dumb questions. The cat owners go nuts for Jason. ABC plays video footage of Jason’s journey which includes lots of him slurping face with Becca. The cat owners like the slurping so they make pleasured noises. Someone get a hose on these cat owners!

After watching heartbreak, Chris Harrison asks Jason, “What did you think of that?” Chris Harrison is terrible. Jason describes how blind-sided he was by Becca. It was super blind-sidey. He still doesn’t understand why he was dumped. That makes sense because a blindside is when you don’t see something coming. It’s like when my brother Donny would point behind me and then, when I turned back toward him because I didn’t see anything, he’d punch me in my adam’s apple. That’s what being dumped by the Bachelorette feels like.

Next, Becca comes out to face her ex-boyfriends. It’s super facey. Chris Harrison points Jason out to Becca so he can get some closure. Jason asks Becca why she dumped him. He says he wants to learn and not get dumped by future girlfriends. Becca tells Jason not to change. She says he’s fine, he just wasn’t for her. I’m sure that will help him heal and get back on the horse. Every guy wants to hear that he shouldn’t change even though he wasn’t good enough.

Colton says that he’s glad Becca looks happy because she deserves to be happy even though she dumped him. That’s pretty much what you would expect Colton to say because he’s super nice. When a woman dumps me, I very much do not want her to be happy. Any time I’ve been dumped by a woman, I would immediately want her to be unhappy. I’d want her to be so unhappy that she got a severe migraine headache from her unhappiness. What kind of person wants someone to be happy? Sickie.

Because it’s been minutes since it was mentioned that Colton was a virgin, Chris Harrison asks Becca if she dumped Colton because he’s never had sex. Becca says that she didn’t dump Colton because he was a virgin. She just didn’t like him enough. I’m sure that will make him feel better.

Wills asks Becca why she dumped him. She says she liked other guys more. Wills says, “I love you.” and Becca doesn’t say anything and the crowd is quiet, so it’s awko taco. It’s a moment I wish didn’t happen.

Jean Blanc apologizes for his behavior and Becca forgives him. It’s forgivey. We’re really getting a lot of closure tonight. This is the most super closurery episode of ‘The Bachelorette’ ever! Jean Blanc uses the opportunity to sell his fragrance. Say what you will about Jean Blanc, but he’s an opportunist.

Next, Becca talks to Jordan. She says that she had fun with Jordan. Jordan admits that he should have opened up more to Becca. Let this be a lesson to you kids at home, always open up to everyone at every opportunity. Otherwise, you’ll never find love.

Chris gets the last chance to talk to Becca. He apologizes for losing his mind on the show and being insecure. Chris says that Becca didn’t deserve his insecurity. I know I didn’t deserve it. As part of the apology, Chris brings out gospel singers to sing an apology. The cat owners go ballistic. It’s super terrible television. I hate it.

Next, bloopers! So many bloopers! They’re so super bloopery! Do you guys remember that? And that? Oh my goodness, the bloopers. Gotta love them. It’s always ten minutes of people tripping and bugs flying around. Ground breaking. The bloopers are the apex of human existence. I hope alien beings pick up ABC’s signal and decide to destroy our planet based solely on the blooper reel.

That’s it. It’s over. All was not told. One more episode next week and then I never have to do this again.