Buffalo Bills @ Arizona Cardinals It’s hard to say what the actual betting line will be. Still, I will guess that the line will open with the Cardinals as slight… 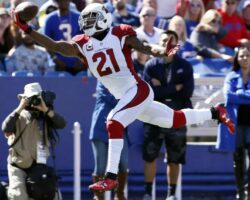 It’s hard to say what the actual betting line will be. Still, I will guess that the line will open with the Cardinals as slight favorites if they win their home tilt against the Miami Dolphins on Sunday afternoon (I still don’t know the outcome as it is currently Sunday afternoon). The Cardinals have come as a bit of a surprise this season, amassing a 5-2 record heading into Week 9 with three straight wins over the NY Jets, Dallas Cowboys, and Seattle Seahawks.

The Cardinals are rated at 2.1  during Week 9 play. Conversely, the Bills are now rated at -0.4 at Team Rankings. I find this number a bit funny since the Bills are six and two. So, when I checked over at ESPN, the 1.2 rating seems more accurate. The Bills should win against an average team on a neutral field by a point rather than lose but a half-point. So, if we compare the FPI of Arizona at 2.3 vs. Buffalo at 1.2, we have roughly a 1-point difference. Given the fact that the Cardinals will be playing at home that will boost the opening point spread  of Arizona over the Bills. That said, according to Sportsbookreview.com’s NFL picks the line will be released at around –2.3.  I think the line will actually be released at -2.5. But we’ll have to wait and see how the Bills game against the Seahawks ends and how well the Cardinals play against the Dolphins.

The Bills are 1st in the AFC East, so far only losing to the Tennessee Titans and Kanas City Chiefs (assuming they continue their scoring bonanza and beat the Seahawks). They have averaged 24.8 points per game, which is good enough for No. 19 in the league. Their scoring margin is a bit misleading. Because they average 24.9 points allowed per game on defense, you would think they are a losing team when you see this. However, they are 6-2 at the moment and about to be 7-2 if they beat the Seachickens. The reason for the negative points differential is because they took a 42 to 16 loss to the Titans.

Part of Buffalo’s success is because the BIlls have the No. 9 yards per play stat at 5.9 per try. Since last season, the Bills have covered the point spread as away underdogs 80% of the time. They are 4-1-2 ATS as road dogs. So, we should heavily consider them as a dog with bite next week against the Cardinals. In general, as the away team, the Bills are 7-4-2 ATS, for a cover rate of 63.6%. In non-conference games, the Bills are 4-1 over the last two seasons, for a cover rate of 80%. When it comes to winning games, the Buffalo Bills are 9-4 as the away squad over the last two seasons. They have won 13 of 18 with equal rest and are also 4-1 straight up in non-conference affairs.

The Cardinals are 6-3 since 2019 straight up (SU) after a win. If they beat the Fins tonight, they’ll be 7-3 for 70%. But the Cardinals don’t play well at home or as the home favorite. They are 4-6-1 as the home team since 2019, winning just 40% of their games at University of Phoenix Stadium and 1-2 as the home favorite, just 33.3%. As a favorite in general, they are 2 and 3, for 40%. So, they seem to collapse under the pressure of expectation. This is another reason why I’ll be paying close attention to this betting line when it’s released late Sunday night and will be tracking how it moves throughout the week.

The more I dig into this matchup, the more I think the Bills are set for an underdog road win in this one.