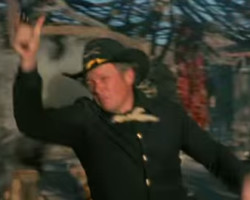 It’s not the first time JBJ’s tasted dirt (or been SHOT… DOWN… in a blaze of glory.)

In 1990, Jon Bon Jovi made his acting debut in Young Guns II.

Billy the Kid (Emilio Estevez) doesn’t let him make it to the 16:33 mark. (Seriously, he doesn’t last a full second.)

Get back in your hole, Jon.

For some reason, you can watch Young Guns II in its entirety right here.

It’s fun… if you can get past the subtitles and Estevez’s horrible narration as “Billy the Old Guy.”