Forehead ashes are a trusted warning that it’s about to get stupid up in here. Dumb Thing 1 – Your Son’s Ridiculous Outfit We all know Easter is all about… 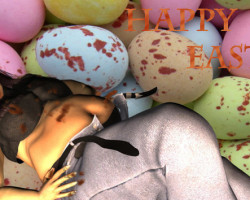 Forehead ashes are a trusted warning that it’s about to get stupid up in here.

We all know Easter is all about celebrating the torture and execution of Jesus Christ but you don’t have to perform a reenactment on your son. He’s a boy. He likes dirt, punching his sister, and ruining things. None of that gets any easier while wearing a miniaturized 3-piece suit. Tack on the especially oppressive heat, dryness, and old lady perfume stink at grandma’s house and you’re asking for trouble.

Again with the needless torture of children and this time you spent five bucks to do it… two of which are going right into the pocket of the otherwise unemployable “gentleman” in the furry suit who’s jonesing because he’s still eight minutes from his next smoke break.

Why do they even exist? You can throw whole handful a jelly beans in your mouth and get a nice mix of sweet fruity flavors. Mix in one black one and the whole thing is shot. Someone needs to fund a new study on the societal benefits of jelly bean segregation.

Here kid, have a handful of jelly beans, two pounds of chocolate rabbits, and a dozen snickers bars with your hard-boiled egg. No, no, it’s cool… go ahead and blow out your pancreatic beta cells. We’ll have your insulin shots ready for you in about twenty years.

If you had to put all your eggs in one basket and choose a story that seems more believable, would you pick this one…

“The son of the man in the sky gets crucified on Earth but then his corpse vanishes and nobody can believe it because there was an unmovable boulder in front of the tomb even though people put the boulder there in the first place so it must have been angels and then he went up into the sky only to return and let everyone know that it’s now okay to do whatever they please as long as they recognize how cool it was that he had just pulled off this Houdini/Copperfield/Blaine-esque stunt and also do what they can to grow his fan club. Then he left again. This all happened over the course of a long weekend. And that’s why we eat fried fish.”

“There’s a giant magical rabbit that hides baskets of eggs and candy in everybody’s house.”

For no good reason, we’ll let the existence of something called a “butter lamb” slide. But if you wear a t-shirt with a butter lamb on it, you’re dumb.