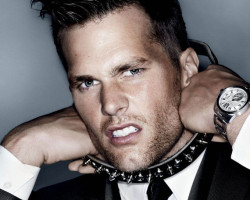 With all of the junk we have had to put up with in our lives, even independent of this stupid dumb constantly-losing football team we all root for, having a league that will sell you a beer at any moment tell you not to drink too much is a bit of a joke.

You know what? It’s Decembe.r we’re 3-8. and I’m freezing but I’m here and I am going to drink until I can’t feel my hurt inside.

OR CAN WE I MEAN DARE TO DREAM GUYS RIGHT?

OR CAN HE I MEAN DARE TO DREAM RIGHT GUYS?

2. Yay Our Good Player Wants To Leave The Team Now

Look, I don’t know who to blame for Jairus Byrd now wanting a trade away from the Buffalo Bills but I am willing and able to blame Russ Brandon.

Look, the guy is an ACE liar. He said Buddy Nix was still going to be GM for awhile and then like one week later “Hey, guys check it out it’s Doug Whaley– high five!”

Then Brandon said after franchise tagging Byrd that their relationship is good. It took 24 hours for everyone to say that Byrd was angry.

What are the odds that maybe Jairus Byrd was told something and maybe it wasn’t true?

“But that’s unfair speculation, sir!” So is insinuating that Byrd might be faking an injury to force a trade, and that hasn’t stopped anyone from doing that.

I’m throwing my lot in with Byrd. He’s fun to watch and he hasn’t lied to me three times.

I know what it was like to be a Patriots fan when the Bills had Jim Kelly. There is no strategy to beat Brady. You simply hope.

He is everything that stands in our way of true glory besides our own rampant and pervasive incompetence. Brady is the target. He is the Ron Burgundy to our Wes Mantooth.

I hate you Ron Burgundy, but God damnit I respect you.