Nik Wallenda: Winner of the Internet 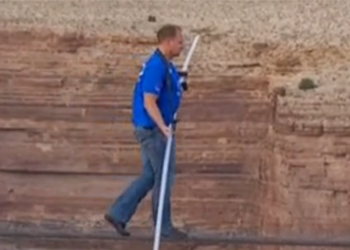 Nik Wallenda didn’t plummet 1,500 feet to his death on Sunday night, so let’s say he won the Internet for last week.

You probably feel pretty good about your weekend, too. The weather was nice and you survived a 5K where they threw some colored corn starch in your face. We are all heroes here, but this space is reserved for the special kind of crazy that puts you in slippers on national television. Just let him have this.

I’m sure a good number of people tuned in just to see if Wile E. Coyote cartoons accurately depicted what happens if you fall into a gorge. Thankfully Wallenda, with the #ThoughtsandPrayers of an adoring nation, rendered useless the sign he brought with him just in case.

The tightrope walker’s quarter of a mile trip across a gorge near the Grand Canyon took about 23 minutes, which somehow gave Discovery Channel 140 minutes of programming. Wallenda was an excellent lead-in to the terrifyingly hilarious Naked and Afraid, which gave unsuspecting households their monthly allotment of ass crack in a hurry.

The last time Wallenda did a thing it was in Niagara Falls, which is basically Buffalo so yay Buffalo. I love Buffalo. His lack of dying last year makes him a winner in our book, so interest was high in his next feat. I mean, they probably were going to mention Buffalo. We should make sure they say nice things about Buffalo in the Arizona desert. Even if he’s not crossing an international border this time and there was no mist whatsoever so, like, whatever Mr. Wire-Walking Guy.

I did see a few Niagara USA ads during the show. Hopefully they were national spots, although it wouldn’t surprise me if the local tourism boards were honestly trying to get some folks living in Sloan to give Niagara Falls a second look. (It’s got a Subway, too! Home cookin!)

I’m glad I didn’t watch a man lose his life on national television, although I openly wondered what Discovery would do if something went wrong. Reaction shots from his family? Would they cut his mic? Thankfully, we didn’t have to find out just how curious the network really is.

Besides, if Wallenda died on Sunday night it would make all those tweets poking fun of the nutter seem in poor taste. Thankfully, your jokes about Wrangler will now make it to the Library of Congress guilt-free.

But seriously, how did someone not tip a bluejeans manufacturer off to the fact that Wallenda was going to wrap his crazy ass in a pair of dungarees? Discovery was too busy getting dramatic establishing shots of a white guy standing on rocks to hustle and get some of that Buddy Lee cash. You know that at least Wrangler would have ponied up some dough. They could shoot commercials with Wallenda and Dale Earnhart Jr. talking about how their occupations have killed everyone they hold dear. It would be gripping stuff until a Real. Comfortable. Brett Favre asked them how to delete pictures off his cell phone.

The lesson, as always: We are easily entertained.