DEAR SANTA: Bills defeat the Raiders in laughable fashion Bills go up against the Pats in week 17 for a “win-and-you’re-in” mega-game And some sponge candy would be nice for… 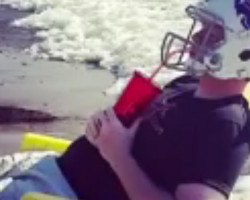 And some sponge candy would be nice for the stocking.

Way back in May, Visit Buffalo Niagara invited people in Buffalo to share their photographic journey through summer on social media. The pics poured in – over 2,700 in all.

Here’s what you all came up with.

You can stay up to date with Visit Buffalo Niagara on Twitter at @BuffaloNiagara.

Smart Thing 2: Don’t Miss Out: The Comedy Scene Is Bigger And Better Than Ever Before In Buffalo

James Kurdziel (103.3 The Edge Program Director/DJ) sat down with the good people over at Buffalo.com to discuss the burdgeoning comedy scene here in the Queen City. We’ve always had a lot of funny people here, but our clubs haven’t always compared well nationally. Well, that’s all changing for the better:

Tix at Helium are generally just 20 bucks or less (some shows are as low as two dollars). Open Mic nites are free. What are you waiting for? Grab a date and go have an awesome time.

In the meantime, go ahead and follow James on Twitter at @JamesRadio. (You can also find Helium at @HeliumComedyBUF.)

Smart Thing Three: Too Much Development To List In This Subheading

BuffaloNiagara.org has provided a revealing infographic on some very impressive 10 years of development through the Buffalo Niagara Medical Campus, and lists more on what’s to come.

Everyone likes Buffalo comeback stories, and The Daily Beast is the latest to feature our town in their piece, “The Rustbelt Roars Back From The Dead.”

Canadian businesses have expanded into the region to the tune of $17.2 million dollars.

WNYMedia shared a video featuring PUSH Buffalo Executive Director Aaron Bartley’s account of “his trip to Germany, how citizens over there are taking control of their energy future, and the possibilities available to us in #BuffaloNY and New York State.”

But the better answer from Jerry Hughes comes when I ask if he’d like to be in Buffalo next year. @WBFO @Th… https://t.co/B89wwLYXPx

The new FC Buffalo kits need to get on your holiday list:

Get some (or one). Love this. Thanks @MarkWhyy for the illustrations. pic.twitter.com/58q2pC3bIp — FC Buffalo (@FCBuffalo) December 15, 2014

Also for your holiday list – this shirt is fantastic:

Bunkers in Baghdad – the best Buffalo non profit you may not have heard of yet. Helping our sons and daughters doesn’t have to start when they get back home: