Get well soon, Bills. Smart Thing One: The Fan Connection, A Sabres Fan Documentary Here’s an example of some local fans doing it right. Mary Wall and Eric Wojtanik have… 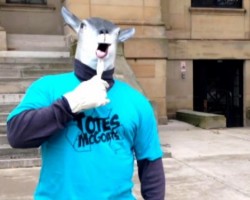 Smart Thing One: The Fan Connection, A Sabres Fan Documentary

Here’s an example of some local fans doing it right. Mary Wall and Eric Wojtanik have been putting together a film about the fan experience for a few years, and have taken to Kickstarter to raise the money necessary for production. The premise seems like a ton of fun:

“Over three years, Mary chased Sabres’ fans around Buffalo. Sometimes it was to the not so fun (surgeries), the super fun (weddings), the suspenseful (will the Sabres win or lose this game?), or the deceptively mundane (trust us on the awesome grocery store footage). Three years of filming left us with about 1,000 hours of footage. We have begun editing that down to 90 minutes. There are a lot of (very expensive) things that need to happen between the start of editing and the movie’s completion, all while keeping our eyes on the ultimate goal, a theatrical release.  That can’t happen without you. Your contribution, at any level, brings these inspiring stories of passion and perseverance, the stories of Buffalo Sabres’ fans, to the world.”

You can find the project on Twitter at @Fan_Connection. Follow them, and by all means, throw some money at them and let’s get this made.

Smart Thing Two: That Creepy Recycling Goat Monster Is So Bad That It Is Brilliant

My first reaction upon seeing the character that Niagara Falls came up with to help inspire children to recycle was terse.

My feelings haven’t changed since then, but terrified or not, this costume idea has really taken off. Totes has gone viral. He’s national news. And that gets kids talking. Talking, in the end, about recycling. I can’t say that he was intentionally designed so awfully creepy so that it would succeed as it has, but if so, bravo Niagara Falls. This is genius on par with Leslie Knope and her low budgeted crew. You can (gulp) follow this demonic/inspired low budget recycling goat man on the Twitters at @TotesMcGoatsNF.

I couldn’t possibly write up a Smart Thing column this month without mentioning Eichel, after his fantastic NHL debut. The kid is sensational, and keeps me on the edge of my seat more than any other player that has played in a blue and gold sweater in decades. I got a phone call from my father after he scored The Goal.

“I’ve been watching hockey since the puck dropped on the first season, and I don’t think I ever saw a player make a play that complete, that incredible.”

Meanwhile, this 18 year old has been earning our hearts and minds off the ice:

“It was about 20 minutes after his first NHL game and Jack Eichel made a beeline for a 6-year-old kid in a wheelchair. No one asked him to. But the 18-year-old Buffalo Sabres phenom recognized the young cancer patient from a hospital visit earlier in the summer. The two spoke for a few minutes before Eichel was whisked away for his postgame news conference.”

A couple games later, he recognized another fan in the stands. When he came out for his 3 stars of the game moment, he strode straight across the ice to make a #OneBuffalo cap delivery.

Eichel just gets it. After being named one of the game’s 3 stars, skates all the way to other end of ice to give gear to a kid wearing 15

Jack turns 19 on October 28. Smart Thing Honorable Mentions/Tweet Roll: Breathe deep the perspective. We need to focus on the Jaguars.

Here’s the thing …. Bills, as constituted last two weeks, lose this weekend vs Cincy. Even with EJ at QB, it’s the JAGS. Get to the Bye. — The Barrister (@theycallmedubs) October 13, 2015

This post was as terrific as it was ridiculous. Well done, Schopp.

See if you can find the mistake I’ve hidden in my column about yesterday’s #Sabres game. http://t.co/rzgP17xI0d @travisyost @DownGoesBrown

Let no snowfall stop you from earning that post lawn mowing beer.

Only in Buffalo do you mow your lawn while it is snowing. Courtesy Kristen Lynn Kennedy #Snowmow pic.twitter.com/zulQx9U788

Thank you to all of our fans who came to the game, watched online and followed us on Twitter. We can’t wait for next Sunday! — Buffalo Beauts (@BuffaloBeauts) October 19, 2015

Speaking of the cold and snow, here’s a great chance to warm up and save some bucks, too:

AK admission is 50% off through 11/14 as we install several major new special exhibitions. http://t.co/ktSeydfYFW

The Sabres are putting some magic together, piece by piece.

And things are really starting to click out there. Enjoy the sweetness of the ascent, Sabres fans.

Note: Questions? Comments? Have a Smart Thing? You can find Scott Michalak hiding from that creepy Totes McGoats monster at @ScottyMCSS.