Just give me one before I die

Store 716 was born in Buffalo, New York on February 22, 2011. It’s a date still referred to around the online t-shirt store’s Main Street office as “Pegula Day”.

Co-founder David Hoffman says “The excitement level during and after Terry Pegula’s first press conference as the new owner of the Sabres was so high, we barely recognized our own city. We saw an energized market and we went for it.” 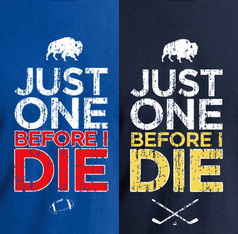 Please, just one championship before I die? A Super Bowl, a Stanley Cup, a World Series… anything!

Built upon the foundation of the “Hockey Heaven” brand, Store 716 grew to include football-themed apparel as well as general Buffalo-related merchandise. When the guys looked to expand their customer base outside of WNY, they tapped into a familiar sentiment– desperation. This led to a new site– JustOneSports.com— with Buffalo merely a part of the spectrum.

“Look, we’re Buffalo. We know pain and suffering. And, even though we don’t spend a lot of time thinking about it, there are a ton of fans in other cities going through the same things we are,” says Hoffman.

The “Just One Before I Die” shirts had a nice run in 2013, with downtrodden yet enthusiastic sports fans relishing the opportunity to put their suffering and unwavering hope right on their chests.

For 2014, Just One Sports has replaced the admittedly tacky and discomforting “Just One Before I Die” slogan with a more tasteful plea: “Just Give Me One.”

Speaking of winning, what’s the plan if one of these teams pulls out a miracle and caps its season with a championship?

“We really want to see it. We’re rooting for these teams and we’ve got ideas for a winner. But they can’t all do it at the same time. If somebody wins, we’ll celebrate… and then add another year to the rest of the teams and keep on rolling.”

“If we don’t have your team available, get in touch with us and state your case. If the demand is there, we’ll print the shirts. We’re in this together. Even if we can’t escape this prison, we’re happy when somebody else can.”

Just give me one. It doesn’t seem like a lot to ask.