“Tina is a slut” – Mark. The message is clear, “Stay away from Tina” or “Go find Tina.” The message was not clear.

The message is clear, “Stay away from Tina” or “Go find Tina.” The message was not clear. I was only 8 years old when I first read this message on the Cazenovia slants in South Buffalo. I didn’t know Tina. I didn’t know what a “slut” was. One thing was clear though, Tina was a slut.

Before Facebook there were the Cazenovia slants. The slants are two mile-long concrete canvases holding the Cazenovia creek at bay and housing all insults, spread-eagle naked lady stick finger drawings and “first initial-last initial hearts first initial-last initial” offerings. And, just like you do with Facebook, when you had a problem with someone, you “posted” it on the slants. Someone thought Tina was a slut and let South Buffalo know about it.

I always wondered why Tina would let that message stay there. Could she not afford the 2 dollars for a can of spray paint to cover up this salacious slander? Could Tina not hop a fence? Maybe Tina was proud of her title. Maybe Tina painted it in the first place.

I got my answer the other day when I noticed the “Tina” in “Tina is a slut” painted over to reveal that “Mark” is now the slut. For over 20 years, Tina was the slut. Now Mark is the slut. South Buffalo must be reeling. 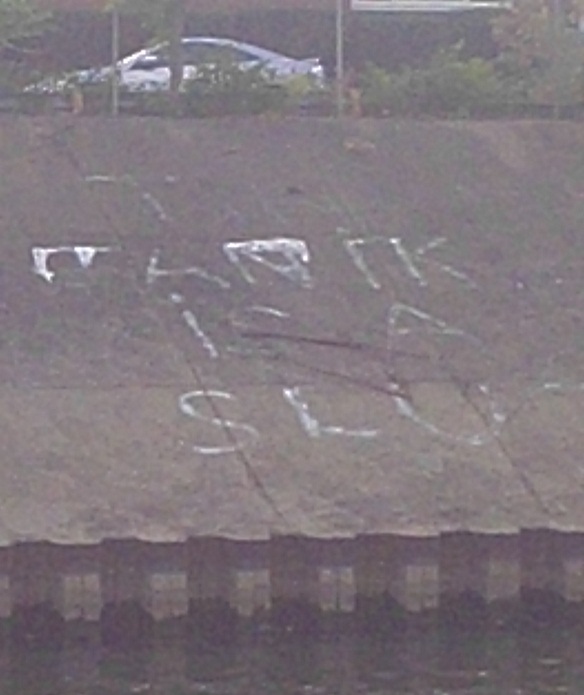 I thought Tina was the slut.

Tina must have finally had enough. At first, being a slut was cool. Who doesn’t love a slut? But we all know that Tina just wanted Mark to pay attention to her. Tina and Mark had a roller-coaster relationship. They met at Buzz-N-Bee on Seneca Street. Mark had just gotten his haircut at Tony’s and noticed Tina talking to some dude wearing jams. He got mad and went into Whoppel’s Hardware and bought the can of white paint, waited until his parents fell asleep and then hopped down from the Stevenson Bridge to let Tina have it.

Tina ran to Hillary Park the next day to ask everyone drinking on the train trestle who painted ‘Tina is a slut’ on the slants. Someone eventually ratted Mark out. Tina found Mark at a Timon dance and yelled at him. They made out. They got married and had a couple of kids. Eventually, Mark got lazy and started playing too much Madden so Tina hopped the fence near the Stevenson Bridge to let Mark have it.

That’s their story. Tina and Mark are sluts.

This story doesn’t explain who “Leathernuts” is or who wanted to welcome him home. Who was Leathernuts and where did he go? I always imagined Leathernuts was a War Hero who got too much sun. 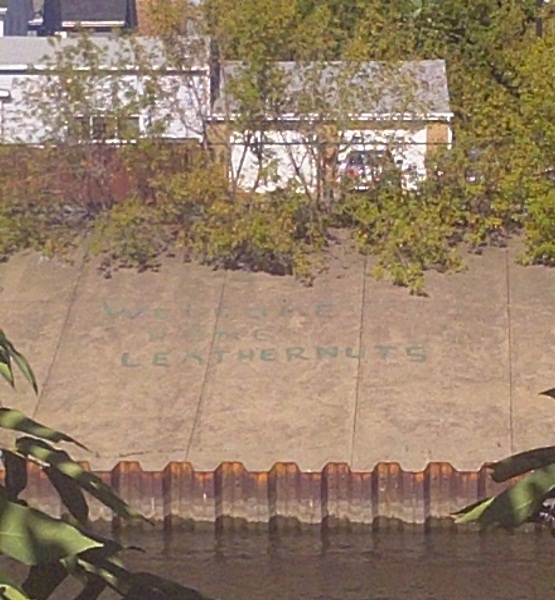 Things just weren’t the same without you, Leathernuts.

The slants are like the “Thousand and One Arabian Nights” of South Buffalo. They’re also a great place to smoke.