For many, February 12 is the day we honor Abraham Lincoln. Let ’em. For me, February 12 a date set aside for celebrating a different kind of statesman on his… 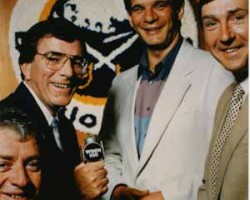 For many, February 12 is the day we honor Abraham Lincoln. Let ’em. For me, February 12 a date set aside for celebrating a different kind of statesman on his birthday.

Mike Robitaille first came to Buffalo 45 years ago as a member of the 1969-70 AHL Buffalo Bisons. He’d return a few years later as a Sabre, and a few years after being traded to Vancouver, he’d return as a broadcaster.

Sometime during the handful of years I worked with him at WNSA Radio and Empire Sports Network, I started to save the audio clips of all the amazing things he’d say. A couple of times, I compiled them for playback on his birthday, and here are a few of those put together for a several minute Best of Roby MegaMix.

I especially love hearing the great laugh of the late Jim Kelley throughout this piece… RIP Jim.

Mike is one of the great talents ever to grace Buffalo radio and television. His persona and personality are unique, and no one works harder at putting together what you see on the air, and making it look flawless, than does Mike.

He’s very humble about it, and if you press him, he’s just as likely to start talking about the sacrifices his family  made for him and his career as being the youngest of a large family in Midland, Ontario. Some guys want you to see how hard they work, but Mike works hard so you can’t see the work he’s put in.

Sabres hockey will be lacking when he retires at the end of the year.