He keyed his wife’s car and a judge made him put this decal on his truck for 45 days?

Who Loves His Wife? 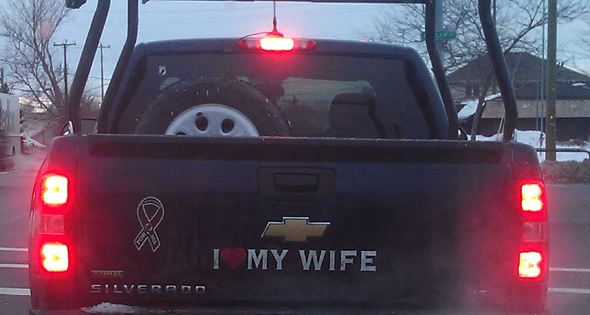 I see this and my first thought is that it has to be the wife’s car. Either that or this guy’s wife put that decal on his truck and he just parks it in a way that he never once goes behind it. Maybe he never sees the back of his truck and is left to wonder why so many other guys in pickup trucks beep their horns at him.

It has to be one of these two reasons. Even on the off chance that you do love your wife, you certainly don’t love her enough to open yourself up to this type of ridicule. Don’t get me wrong, I like this guy way more than the truck-testicle guy– it’s just the sort of behavior that begs an explanation. Generally, guys who own pickup trucks don’t soberly declare love for ‘the ole battle axe.’ They make jokes about kitchens and beer-gettin’.

Telling your wife you love her is not something done publicly. You do it when she has a fever and right before she falls asleep, or over one of those wall-mounted ‘prison’ phones. I even cheated in church and said ‘lub.’ She said, “Did you say ‘love’ or ‘lub’?” and I said, “What do you think?”

I’m not threatened by this man’s love for his wife. I’m just a bit confused. It was a long red light so I thought of some other possible explanations:

– His work buddies shoplifted this sticker from a TJ Maxx and put it on here while he was pulled over on Route 75, peeing.

– He keyed his wife’s car and a judge made him put this decal on his truck for 45 days.

– There’s a ton of grime on the tailgate so you can’t read the ‘TO SCREW’ part of the decal.

– He jumped through some legal loopholes and somehow married a 1987 cardboard Kathy Ireland storefront Budweiser display.

– He’s a complete wizard with sarcasm.

– He really messed up. I mean, not just ‘forget to pay the electricity bill’ or ‘missed a birthday’ messed up. He ‘I slept with her sister because I was drunk and thought it was her Mom’ messed up. This guy had chunks of corn in his hair and at least one black eye when his wife discovered what he had done to earn this.

– True love is real and it is all that matters.

Here’s to you, ‘I LOVE MY WIFE’ guy. I hope he’s not married to the yellow Cobalt I saw on Millersport with the bumper sticker that said “I’m cheating.”