You want to know just how little $1.4 billion dollars buys these days?

Yesterday a group proposed a $1.4 billion plan to build a downtown stadium for the Buffalo Bills.

If we’re being serious though, $1.4 billion is not all that much money in big-boy, NFL-scaled economics.

Just divide the $1.4 billion by the assumed 30-year lease and you’re talking about $47 million per year plus interest.  Divide that $47 million by the 76,000 seats and we’re talking about $618 dollars per seat, per year.  So if THE FANS were asked to pay for the entire $1.4 billion, we’d have to pay an extra $60 per ticket. Certainly doable.  Now consider that both the NFL and the state would pay sizable portions, and we’re in business.

About that public subsidy… how the heck is New York State ever going to find $400 million to spend on something like this? Consider for a minute that NYS has commited TWO HUNDRED AND SIXTY EIGHT MILLION DOLLARS in incentives to Yahoo! in Lockport which currently employs ONE HUNDRED AND FORTY SEVEN PEOPLE.

Ok, ok… enough of the accounting mumbo jumbo. You want to know just how little $1.4 billion dollars buys these days? 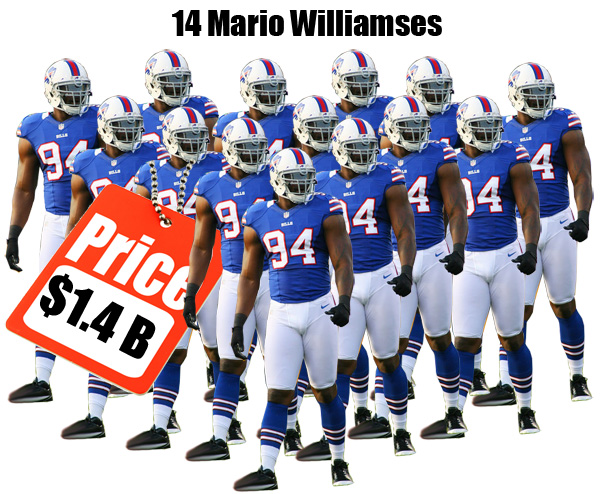