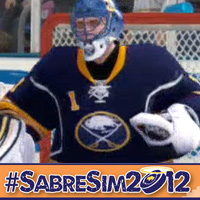 (BUFFALO, NY)  It took just 1:54 for Mikhael Grigorenko to register his first NHL point, helping to set up Ville Leino’s power play tally that proved to be the game winner in the Sabres’ 3-0 victory over the Devils at First Niagara Center.  Grigorenko, called up to replace an injured Marcus Foligno, added an assist on Jordan Leopold’s second period score to give him a 2 point night in his first NHL game.

Jhonas Enroth stopped all 18 Devils’ shots to quietly earn a shutout in his season debut.

On Buffalo’s first power play of the night, Grigorenko won a faceoff in the offensive zone and worked the puck from the corner to the point.  Andrej Sekera’s blast popped to Leino, who quickly wheeled to flick it past New Jersey netminder Martin Brodeur for the 1-0 lead.  It was Leino’s second goal of the year.

The Sabres grabbed a 2-0 lead late in the first following a Travis Zajac turnover.  Cody Hodgson’s shot deflected to the back wall and ricocheted to a waiting Jason Pominville, who buried it for his third goal of the season.

Buffalo’s third goal of the night was the product of another faceoff win by the Sabres’ rookie center.  Grigorenko controlled the puck and calmly turned to find Jordan Leopold in the high slot.  Leopold beat Brodeur high to the stick side to make it 3-0 at 11:11 of the second.

Buffalo moves to 3-2-0 while New Jersey remains winless at 0-3-2.  The rematch of this home-and-home series takes place Friday night at Prudential Center in Newark.

What did you think of the Sabres’ performance? Use the comments section below.
.