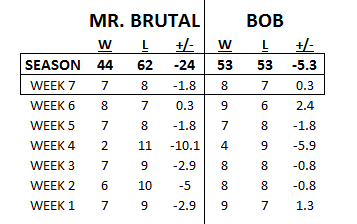 Great week for the Vikings. After losing in the final moments in Buffalo when Kyle “Moses” Orton led an improbable miracle comeback in the dying seconds at Ralph Wilson Stadium, they stay on the road and head to Central Florida to play the Tampa Bay Bucs who are coming off the bye. They won’t be back for another week to play in the friendly confines of the University of Minnesota home field UCF Stadium… called Ultimate Crappy Football Stadium by the locals since the events this season surrounding the Vikings and their resultant poor play has infested the ambient atmosphere. University of Minnesota fans are concerned, since this year the Golden Gophers of head coach Jerry Kill are having a rare positive season in the very mediocre Big X.

Speaking of the Golden Gophers, former head coach of the basketball team, Tubby Smith had a ignominious introduction at Midnight Madness in Lubbock, Texas last week. The second year coach of the Texas Tech Red Raiders roared into the arena wearing a full-length leather coat and dark sunglasses. Amidst KISS style pyrotechnics, dry ice, aircraft landing light special effects and the thumping counter rhythms of Isaac Hayes and the theme from “Shaft,” Tubby drove the hog onto the basketball court ostensibly as the living embodiment of fictional private detective John Shaft.

Tubby then promptly wiped out the Harley on the slippery wooden floor as he tried to come to a stop, and barely escaped injury. Now, nobody who has ever met, read about or even just observed Tubby Smith on television would ever associate the reserved, simmering “Cool” of Shaft with Tubby. (Especially the original early 70’s film series starring super understated “Cool” Richard Roundtree and not necessarily the intense simmering version of “Cool” in the 2000 remake starring Samuel L. Jackson acting as a caricature of Samuel L. Jackson.

We might have written this near disaster off as a failed attempt at parody, but this is Texas and their capacity to participate in, or conceptualize the intellection of any form of irony is by reputation, virtually unknown.

Celebrities, actors, athletes and rock n’ rollers have often in the past been associated with Harley Davidson motorcycles. Many tried to benefit from the “Bad Ass” image that driving a hog evoked in a public that always craves carefully prescribed, spoon-fed rebel doses of “Bad Boy Chic.”

This all started in the fifties with Marlon Brando, James Dean, Elvis Presley and others– and hasn’t stopped to this day.

Some infamous and lesser known examples.

At the end of the 60’s, Hollywood Studios were in big trouble. The mood of the nation had changed, and big budget film extravaganzas like “Paint Your Wagon” were losing money. When Dennis Hopper’s low budget, counter culture “Easy Rider’ made millions in profit in 1969, the film studios took notice.

Trying to cash in on the 60’s concepts of Free Love, Free Psychotropics, Anti-War & Anti-Establishment concepts; the studios all tried to emulate the Easy Rider example, often with calamitous and unintentionally funny results.

One such example was the 1970 release of “C.C Rider” or “C.C. & Company” (depending upon whether you saw it in a drive-in or theater, don’t ask). This turkey starred Ann Margaret & Joe Willy Namath who at the time was arguably the most popular personality in America.

While there can be great debate as to whether Joseph William Namath’s qualifications are worthy of the NFL Hall of Fame (especially the last half of his career), there can be no doubt as to the predication of his acting ability, or for that matter his competence as per regarding riding motorcycles.

As if the bad script, directing, plot, dialogue, acting, camerawork, and staging of this turkey of a movie wasn’t bad enough, Joe proved that he could not handle a motorcycle properly, and constantly slid his HD chopper into obstacles, other vehicles and the ditch. The studio and their insurers became very concerned and after several weeks started using stunt doubles for even simple riding shots and utilizing tight closeups on Joe to give the illusion that he was driving.

If the New York Jets had known how dangerous the shoot really was, they never would have allowed him a waiver of the “non-participation in reckless or dangerous activity for recreation or the pursuit of parallel sources of non-football related income.” clause in his Jets’ contract.

Despite scathing reviews by the film critics, this forgotten film actually topped the box office for two weeks, such was the popularity at the time of Joe Willy. (To be fair, the film does have an amusing and somewhat iconic opening scene where Joe enters a supermarket, makes a sandwich, eats it and leaves after only paying for a pack of gum.)

The lead singer for heavy metal pioneers Judas Priest started riding his custom Harley Davidson onto the stage during certain songs in their concerts in the late seventies. (He was not the first, however.)

During one of their raucous shows somewhere in the U.S.A. things went wrong. Rob sat perched on his Harley, at the top of a long ramp, out of sight from the crowd and eagerly awaiting his cue to descend down to the stage. As an overabundance of dry ice fog flooded the stage, the visibility became zero. Rob roared his Harley to the screams of the crowd, the band started playing, eventually drowning out the bike and Halford accelerated the bike down the 35 foot ramp onto the stage.

Unfortunately, One of the hydraulic cylinders failed and a support beam for a metal gargoyle failed to lift. Rob hit the beam, came close to being decapitated, was thrown from the bike, fell 20 feet down to the floor to a hidden spot behind the ramp and the bike continued down to the stage riderless and lay prostate at the bottom.

However, the fog was so thick, no one could see the bike laying there and the band continued to play the introduction for several more minutes. The stage manager and roadies couldn’t figure out what had happened and when the dry ice lifted showing the motorcycle alone on the stage they went into panic mode. The audience could not see any of this and had no clue what had happened except for the sight of a prone motorcycle laying on the stage. The staging was so massive and complex that nobody could find a trace of Halford for another five minutes. Finally, they located the concussed and bleeding from the forehead lead singer and revived him. The band continued to play an improvised instrumental variation of the song without stopping.

Halford resisted treatment, except for a temporary tourniquet around his head, fashioned from a shredded laundry bandanna taken from the singer’s waist belt. He then emerged from behind the ramp, jumped on the still running Harley, gently eased it to the front of the stage, dismounted and on cue starting singing the opening lines to “Hellbent for Leather”… albeit ten minutes later than expected. He then finished the concert without incident.

The show must go on!

Editor’s note: Halford dumped his bike on stage AGAIN in 2011.

The first band of record to use a big Harley Davidson as a stage prop was New York State’s own Blue Oyster Cult. Starting in the early seventies, lead singer Eric Bloom would drive his custom Harley onto the stage and dismount to sing a rousing encore version of Steppenwolf’s “Born to be Wild.” The band always did this as a tribute to their sixties hard rock roots that inspired them and their music as well as honoring their friend, the song’s writer Mars Bonfire.

During a huge outdoor State Fair Show in the Midwest in the mid-seventies, there was trouble. A Boss Hogg style egomaniac sheriff and a platoon of his deputies were attempting to serve an arrest warrant to one of the band’s favorite roadies. The trouble was over some non-violent domestic dispute involving the roadie and a female niece of the sheriff that occurred several years before. The roadie, band and management were vehemently convinced that it was totally bogus and this was a “Good Ole Boy” extortion attempt to extract money from a rock band.

However, the police could not find the party and angrily staked out the entire stage area for the duration of the concert. The band hid the roadie in a travelling case for the entire concert behind the keyboard amplifiers. He was dressed in a make-shift “Easy Rider” Peter Fonda motorcycle costume and helmet. At the end of “Born to be Wild, ” more dry ice flooded the stage, the disguised roadie emerged unseen from the road case, came on stage, hopped on the back of the Harley and Eric Bloom drove down the ramp at the back of the stage, through a weakly chain-locked gate, right by puzzled deputies who thought this was part of the show. They sped off the State Fair Grounds, onto the highway and didn’t stop till they got to the band’s hotel in the next county and out of the jurisdiction of Sheriff Reed Morgan and his minions of inbred mouth-breathers.

Anyway, due to Tubby Smith’s near disaster at Midnight Madness, the Tampa Bay Buccaneers have cancelled a similar stunt. Their insurers have had them permanently shelve the idea of Lovie Smith riding a Harley out onto the field Sunday during the pre-game introductions dressed as a pirate.

It won’t be necessary, The Bucs should easily beat the weary Vikings. After all, the NFC South is still up for grabs.