“Try working 40 hours a week for 40k” and other delights. 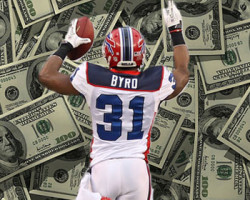 The window for Jairus Byrd to reach a longterm contract agreement with the Bills has closed. As we wonder whether he’ll sign his franchise tender, it’s opinion time! Enter Warren Sapp.

“It’s about what the team deems you worthy of being paid,” Sapp said. “Sign your tender, go back to work and earn it like your rookie year when you came into the league and you went to the Pro Bowl. That’s what you do. Whenever somebody questions your play on the football field, you go out on the football field and you show it.”

Sapp said because the Bills didn’t pony up the dough, Byrd must not have done enough to earn it.

“I question him because you’ve been there the whole time with Buffalo, and if Buffalo doesn’t see you as an asset as far as their franchise player and the guy they want to put as their safety, (that says something),” Sapp continued. “If the team that watches you practice and play every day doesn’t deem you the best safety in the game, then you might want to look at yourself.”

It wasn’t long ago that “experts” like Sapp let their thoughts fly and that was the end.

OUT– calling the local sports radio show to complain about a player’s contract dispute.

IN– contacting the player directly and publicly, with no regard for just how freaking weird it is to do so.

There’s the “You make lots of money and I don’t so I’m mad at you” crowd.

@jairusbyrd I guess it is all about money with you that is all you players think about and really be a man a join your team you big baby.

@jairusbyrd you going to work this week? I’ll trade you my salary for the rest of my life for your one year offer! #justagame

There’s the “This tells me all I need to know about you” crowd.

@jairusbyrd if your not gonna play then what? You shouldn’t have pics of football players up cause u ain’t on this team #selfish

There’s the “Let me give you some unsolicited advice” crowd.

@jairusbyrd bro what do you even need money for? Your a bird. You can poop on peoples cars and shit. Just sayin. Plus bird food is cheap — Jesse Romberg (@Torontoke) July 18, 2013

I wonder if @jairusbyrd likes the verbal abuse he gets on Twitter. An athlete holding out may want to stay off social media for awhile.

At least Stevie’s got your back.

Of course, Stevie’s got problems of his own… even on his fuhking birthday.