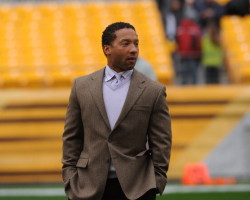 Bills Should Make the Playoffs

10. I Think I Think The Bills Are A Playoff-Caliber Team

Yep, ending on two positive notes — EJ Manuel’s Russell Wilson-type season being the other —but they’re two predictions for which I have strong convictions.

Along with some holdovers from the Buddy Nix regime, Bills GM Doug Whaley has done a marvelous job building a legitimate playoff contender.

Deep teams go to the playoffs, and that’s what the Bills are now, a deep team that’s been assembled to be able to withstand the typical turmoil of an NFL season.

Sure, it’ll come down to the quarterback, like it does with just about every team.

But this roster is of playoff-caliber for the first time in a while. This roster is the finest collection of top-to-bottom talent since the 2004 season in which the Bills went 9-7 and missed the playoffs by one game.

I write “the Bills are a playoff-caliber team” and not the definitive “the Bills WILL be in the playoffs” statement because bounces and injuries can never be predicted.

And, yes, bad bounces and injuries will occur.

But based on the Bills’ overall skill-level, they should reach postseason this year for the first time this millennium.

Part 7 – I have figured out Mario Williams, kind of

Part 8 – Sammy Watkins will have a strong rookie year, but let’s be patient