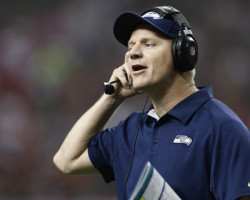 CoachWatch2015: Who is Darrell Bevell?

1. To the best of your knowledge, explain Darrell Bevell’s general offensive philosophy and/or scheme.

Kelly: Bevell always has believed in balance and a focus the run game going back to his time as OC in Minnesota and continuing here in Seattle. It’s tough to really pinpoint Bevell’s philosophy and scheme as opposed to that of Pete Carroll and Tom Cable, because Carroll has a pretty specific idea of what he wants to run and Cable is in charge of planning the run game, but overall I’d say that Bevell likes to throw the ball deep after setting up play-action with a heavy dose of running.

One hallmark for Bevell’s tenure is that the Seahawks run relatively simplistic schemes and route combinations but they do it out of a multitude of formations and personnel groupings, so it’s hard to identify both pre-snap and once the ball is snapped. This is one of my favorite attributes of the Seahawks’ offense and I believe that Bevell is the architect for it. I’ve also been a fan of his play-calling for the most part — I think fans can criticize anything after the fact, but overall I’ve liked what he’s done.

Bevell likes “heavy sets” with two and three tight ends, and he’ll throw in a 6th offensive lineman pretty often. The Seahawks’ base run game is the read option and their base personnel grouping is 3 receivers, one back, one tight end. That said, they run a lot of different stuff and like to use their guys in a number of roles. Each player in this offense has to block and each player has to be versatile.

Bottom line, he likes to run, he likes to play physical football, and run it at the opposing defense. The Seahawks passed the ball fewer times than any other team this year and ran the fewest number of plays.

They have embraced Russell Wilson’s unique playmaking attributes and instead of trying to make him become a prototypical pocket passer, they’ve designed an offense that accentuates his skill set. I think that’s the hallmark of a good coach and coordinator.

2. Obviously, Bevell’s worked hand-in-hand with Pete Carroll for a few years now. Do you think his time spent with Carroll could help to make him a good head coach? What are some potential negatives?

Kelly: I think Carroll is and would be a tremendous mentor. Carroll’s entire program is ridiculously specific – goals, plans, systems, everything – and the foundation of it all is based on self-actualization. A huge part of it is development of players and coaches, then, and this means Carroll is taking steps day in and day out to help everyone in the program grow.

He’s stated publicly that he works with his staff to try to prepare them for future positions. In Bevell’s case, Carroll has said that he does a lot to help prepare Bevell for a head-coaching job someday.

I think the way that Carroll has been the czar of the Seahawks franchise probably will rub off well on his assistants and help them realize the “best practices” of healthy organizations. He may face the reality of going somewhere that doesn’t give him full power, though, and as we saw in Philly and with Chip Kelly, this can cause issues (Kelly got it sorted out, obviously).

3. How much would you say Bevell played a role in the development of Russell Wilson? What aspects of his coaching or play-calling helped Wilson the most?

Kelly: Well, like I said, the Seahawks haven’t been reticent to design an offense that really accentuates Wilson’s skill set. That’s a double edged sword, of course, and Wilson’s pocket passing sometimes plays second-fiddle to his improvisation and running around.

I think he’s been pretty instrumental in developing Wilson, though, and that’s a big reason I hope that Bevell doesn’t get hired elsewhere. Bevell’s a former Wisconsin quarterback and he understands the offense that the Seahawks want to run — the communication between the two is, as far as I know, top-notch. There’s continuity. There’s value in that.

I think the Seahawks’ decision to embrace Wilson’s tendencies (and talents) to get outside the pocket have helped the Seahawks a lot. They came up with “Scramble Rules” for their receivers that dictate where each player should go once Wilson breaks the pocket. They’ve embraced the read option scheme, and have expanded it a ton this year, and Wilson’s rewarded their trust by not taking any hits.

Overall it seems like a good relationship between the two. If there’s a gripe, it’d be that at times Wilson needs to have someone put their foot down and make him learn to stick in the pocket a tick or two longer.

4. The Bills are, essentially, a semi-competent QB away from being a scary playoff team, and EJ Manuel’s still on the roster. Do you think Bevell has the knowledge to be a good teacher of the quarterback position / help Manuel’s development? What would you takeaway the most from the time he spent with Wilson?

Kelly: Yeah, I think Bevell really understands quarterbacking. I think that he knows when players have limitations and one hallmark of the Seahawks’ offense has been that they don’t really ask Wilson to do things that he’s not very good at. For instance, the slant route in general isn’t a huge part of the Seahawks offense and they rarely throw over the middle of the field.

The fact of the matter is, Wilson is short, so at times it’s tough to see through the traffic in that area. They don’t ask Wilson to make these throws, knowing they’re inherently riskier.

Along those same lines, I think if Bevell were to take his offense to Buffalo, you’d see a similar style as we see in Seattle: run heavy, “safe” shots down field, lots of throws at the sideline (these passes tend to ricochet out of bounds rather than into another player’s arms, and they’re thus less likely to be intercepted), and lots of constraint plays that utilize the Bills’ weapons. I think Buffalo has a pretty good arsenal of players that could run the Seahawks’ system — they’ve got crazy speed downfield, they’ve got Sammy Watkins all over the place, they’ve got good running backs — they just need a consistent and efficient system that helps take pressure off of Manuel. I think that’s exactly what Seattle did with Wilson early in his career (and they’re still doing it). Wilson has been very consistent his first three seasons.

5. We saw Bevell use Percy Harvin in creative ways, or the ways many believe Harvin needs to be used while the two were in Minnesota and Seattle. But Harvin’s production was odd in 2014 (low yards per catch), but he did get the ball a lot in space. Would Bevell be a good or bad HC for Sammy Watkins?

Kelly: I think Bevell would be a good HC for Watkins. He knows how to use his best players, typically, and I’d guess he’d lean on Watkins to help take pressure off of Manuel (or whoever is playing QB), like I said above.

The Harvin usage was a little strange this year — it was almost like there were too many cooks in the kitchen with Russell Wilson, Marshawn Lynch, and Harvin all trying to “carry” the offense. I think in Buffalo’s case, Watkins would be the undisputed top playmaker and there wouldn’t be that weird dynamic.

Also, I think Watkins is probably going to be more rounded as a deep threat than Harvin was, so he’d, in theory, fit the offense that Bevell wants to run much better.

I get the impression the issue with Harvin was that he wasn’t buying in to how he was being used and the Seahawks tried to placate him by running bubbles and fly sweeps. This got them away from their core competencies of running the ball and throwing it deep. I don’t think Bevell would make that mistake again.