View image | gettyimages.com I’m finally ready to write a column about the trade that sent Kiko Alonso to the Eagles and LeSean McCoy to the Bills. I thought of going… 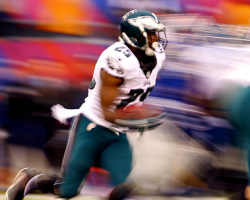 I’m finally ready to write a column about the trade that sent Kiko Alonso to the Eagles and LeSean McCoy to the Bills.

I thought of going on a Twitter rant, but apparently most people don’t like it when someone they follow sends more than a few tweets every couple of minutes. And I get it. #TimelineDiversity.

Before I start, I already wrote a column that mapped out free agency and the draft for the Bills, so if you’re ready to move on from the trade, head there.

But if it’s still at the forefront of your mind, and COME ON, WHY WOULDN’T IT BE? Barring The Miracle On Ice 2.0 over the next two months, the Sabres are going to either pick Connor McDavid or Jack Eichel in this year’s NHL Draft. And that doesn’t even happen until late June.

From a long-term, team-building perspective I will never agree with this trade from a Bills’ standpoint. I wouldn’t have pulled the trigger.

If Doug Whaley plans to upgrade the offensive line either in free agency or the draft, and Greg Roman believes his complex blocking scheme that was wildly successful in San Francisco will have similar results in Buffalo, the Bills won’t necessarily need a high-paid, established star running back carrying the football.

Due to my philosophy that running back production is mainly subject to offensive line play, any club is allocating resources better when it drafts a young, cheap running back instead of paying a sizable amount of money to a veteran who’s been tackled 1,500+ times in the NFL already.

This running back draft class happens to be loaded, so it wouldn’t have been a stretch whatsoever to assume Buffalo could have used even its first selection — pick No.50 overall — on one of the “best” runners.

Heck, the Bills organization should understand this. ( Some executives have been around for a looonnngg time.)

O.J. Simpson was the first pick in the 1969 draft, but Thurman Thomas was picked in the second round, a handful of first-round picks never signed second contracts in Buffalo, Fred Jackson is one of the NFL’s most obscure undrafted free-agent running backs, Anthony Dixon was a sixth-rounder and Bryce Brown was grabbed by the Eagles in the seventh round.

Just because I, personally, would always simply draft a running back instead of paying one north of 25 years old doesn’t mean I think the trade as a whole was dumb for the Bills.

With McCoy on the roster, running back is clearly no longer a need, therefore Buffalo has more options in the draft. Tight end? Offensive lineman? Linebacker? Pass-rusher? Wide receiver? Free agency will change things, but really, the Bills don’t have a super glaring need they’d be able to address with the 18th pick in Round 2.

Based on how much I believe productive running backs can be found in the mid-to-late rounds of every draft, the fact that Buffalo likely won’t pick one at all is good for the organization.

On LeSean McCoy and his contract

Paying a running back — and it doesn’t matter if that guy is Adrian Peterson, or, yes, LeSean McCoy — slightly over $10 million in one season is bad business. Sure, the Bills — and many teams — could technically afford to do it, but it’s a horrible way to spend money.

As I wrote in the above column I linked, everyone — including myself — initially glossed over the fact that there’s about a 99% chance McCoy and the Bills restructure his contract.

No running back wants $1 million guaranteed left on three years of a deal, and that’s the predicament the soon-to-be 27-year-old McCoy finds himself in.

No team wants to pay a running back a $9 million base salary either.

What does that mean?

It means the two sides will come together on a newly designed contract that includes more guaranteed money for McCoy spread out over the next three (or maybe four if extended) years, which makes McCoy happy, and lowers his annual cap hit, which makes the Bills happy.

Tom Mitchell of Buffalo Rumblings explained everything well in this excerpt from an article he wrote on McCoy’s contract situation:

For example: if the Bills converted $6 million of McCoy’s 2015 salary into a signing bonus, prorated over the final three years of the deal, this would drop McCoy’s 2015 cap hit to $6.25 million, while increasing his cap hits in 2016 and 2017 to $9.15 million and $9.85 million, respectively. As McCoy will only be 27 entering this season, it does not seem unreasonable to expect to get three more good years out of him. Even if McCoy begins to break down by 2017, when his cap hit would be the highest under this proposal, a $2 million dead money charge three years down the road to save $4 million now, plus create good will for your potential new star player, seems like a beneficial trade-off.

The perception of how the Bills fared in the trade would, or maybe should, change dramatically if McCoy, a top 5 running back, counted  $6.25 million against Buffalo’s 2015 cap instead of $10.25.

Essentially, the Bills could have gotten a young, “fresh” running back by using a second- or-third-round pick in the upcoming draft.

Instead, they’ll pay between $5 – $7 million per season over the next 2 – 3 years for one of the best running backs in the NFL and, they get to use that second- or-third-round pick on position other than running back.

That’s the trade off.

Alonso had a fine rookie season. He played EVERY SINGLE snap for Buffalo’s defense and was the most impactful linebacker the Bills had since Takeo Spikes or London Fletcher in 2004. Sorry, Poz.

But he was the classic definition of “overrated.”

The #LegendOfKikoAlonso, the cool name, the hair…and mainly due to the fact that his most impressive stretch play came in the month of September boosted him to a level of recognition that didn’t match his overall play.

Kiko had four interceptions as a rookie, and all came before Week 5.

By season’s end, his PFF grade of +10.3  was inflated by a +13.1 coverage grade, and a sizable chunk of that coverage grade came before October.

Then again, the notion that Alonso would have been a situational role player in 2015 with the Bills — I don’t buy that, especially considering there’s a good chance Brandon Spikes signs elsewhere in free agency. But Ryan could have his eye on free-agent David Harris, who’d man the middle between Preston Brown and Nigel Bradham. Maybe that was the plan all along.

Either way, it would have been a treat to watch the rehabbed Alonso play in Ryan’s complicated and proven scheme.

But did the Bills trade away Darryl Talley in his prime?

Also, and this is important, as many Bills fans know, the defense — which did have added depth — got better in 2014 with Alonso on the sideline and Bradham — who’s underrated and a more explosive athlete than Alonso — in a prominent role.

The Alonso for McCoy swap seems like it’ll be a win-win for both teams involved. Alonso may not be the most ideal fit in Philly’s 3-4 alignment, but coverage linebackers are vital in today’s NFL.

In all likelihood, the Bills could have picked someone like Ameer Abdullah or Jay Ajayi in Round 2 and with a bolstered offensive line — I imagine that bolstering is a priority heading into the 2015 season — received solid production.

But they do know what they’re getting with LeSean McCoy, and that’s one of the league’s elite running backs.

Then again, it’s not nuts to think of it this way either — if the Bills had gone the “draft a running back” route in 2015, they’d likely be letting said draftee hit the open market in 2018.