#455977882 / gettyimages.com When your team stinks, power rankings are the worst. You know they lose a lot, you know they’re in the cellar, but that doesn’t stop the pithy… 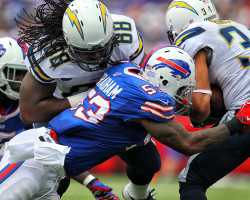 Power rankings after Week 3: What they’re saying about your Bills

When your team stinks, power rankings are the worst. You know they lose a lot, you know they’re in the cellar, but that doesn’t stop the pithy little comments (and the accompanying downward-facing arrows) from making things even worse.

When your team starts 2-0, power rankings are fun.

When your team starts 2-0 in a season where expectations are low, they’re even better.

When your team falls to 2-1, you still have to check them out.

Here’s what “they” are saying about your 2014 Buffalo Bills.

Yep, the Bills topped the Bears in Week 1 and now rank below them. But the simple fact of the matter is, Buffalo was soundly defeated at home on Sunday, while Chicago’s only loss so far is that overtime squeaker to start the season. Also, the Bears‘ weakness — their defense — seems to have at least been partially fixed, whereas the Bills are still having trouble getting the ball vertical. Frankly, EJ Manuel just isn’t an accurate passer at this point in his career, at least not consistently.

Was the 2-0 start a mirage? Was that the real Bills against the Chargers?

Sammy Watkins wasn’t able to repeat on his impressive Week 2 breakout, and he and E.J. Manuel can share the blame for that. Watkins hauled in just two of eight targets for 19 yards and was noticeably late on turning into several throws. After a week off, the same unfortunate trend was on display again as Manuel looked uncomfortable in the pocket and showed poor footwork that led to inaccurate passes. This is a team that needs to dominate on both lines and control the clock by successfully running the ball if they want to get back to their winning ways.

Reality check or reality? Stalled drives, penalties and lack of explosive plays a recipe for losing they know all too well.

Buffalo needs more from EJ Manuel. Manuel’s QBR is 31.1, 32nd out of 35 qualified quarterbacks. Buffalo is the only team above .500 with negative offensive and defensive efficiencies.

Honest story: A Bills fan ripped these power rankings, then sent me his own that had the Bills as the fifth best team in the NFL. Brilliant.

The offense sputtered a bit against the Chargers. It doesn’t help when your wide receivers combine for just 49 yards on eight receptions.