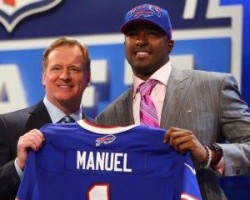 Thumbs Up on Manuel’s Week 1 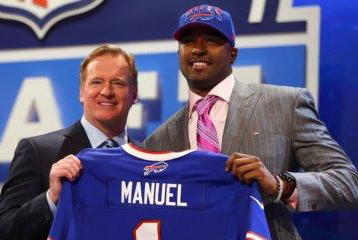 When the first QB taken in the NFL Draft makes his first NFL start, the football world is watching. Here’s a quick glance at some reviews of E.J. Manuel’s performance against the Patriots. Each quote is an excerpt– click the author’s name for the full article.

He may not have an NFL win yet under his belt, but one week into his professional career, Bills rookie quarterback E.J. Manuel’s first victory likely will come sooner than later.

That much was evident by the way he led the Bills throughout Sunday’s 23-21 punch-in-the-gut defeat to the Patriots.

Manuel, who was tabbed the eighth overall pick out of Florida State in April’s draft, showed what all the ado was about.

Displaying equal parts poise and ability, Manuel completed 18 of 27 passes for 150 yards and delivered two scoring bull’s-eyes, one heading into halftime, the other coming out of it, as he spurred the Bills to within a whisker of pulling off a Week 1 upset.

Moreover, Manuel didn’t take a sack or turn over the ball.

Completing 18 of 27 passes for 150 yards and two touchdowns, it was the same performance that Buffalo received from their first-round pick in each of his two August appearances.

Now with three games under his belt — two preseason and one regular season — Manuel has yet to throw an interception in game action. He had two close calls on Sunday, but managed to come away without any turnovers. He underthrew receiver Robert Woods in the first quarter, with Patriots cornerback Alfonzo Dennard nearly coming down with the pick, and later had an interception by cornerback Kyle Arrington deep in Bills territory overturned by official review.

Manuel, the first quarterback chosen in April’s draft, stuck mostly to shorter throws and check-downs on Sunday, a trend that has carried over from the preseason. The results weren’t always there: the Bills couldn’t move the ball when they needed to late in the fourth quarter, with a 4-yard completion from Manuel to tight end Scott Chandler ending the drive on 3rd-and-10.

The best two throws of Manuel’s afternoon were his two touchdown passes. He lofted an 18-yard touchdown to Woods with seconds remaining in the first half, and gave the Bills the lead on another 18-yard lob to Steve Johnson to cap an 80-yard drive at the start of the second half.

Buffalo’s EJ Manuel, the quarterback drafted ahead of [NYJ’s Geno Smith] and the only first-rounder in the class, was at the other end of a tight field-goal game with a 23-21 home loss in his debut. The only difference was Manuel was facing a much mightier opponent— Tom Brady’s Patriots—than the Bucs and Freeman.

Bills coach Doug Marrone said before the game Manuel would have no restrictions coming off a late preseason knee injury. Still, as expected, they broke him in with a heavy dose of the run (30 combined carries for C.J. Spiller and Fred Jackson) and had Manuel do a lot of dinking and dunking (no pass play for 20 or more yards).

While the Bills contained Brady and New England’s running game for as long as it could with a bend but don’t break approach, they could afford to keep Manuel in a more conservative game plan. That will change as future game situations dictate, but Marrone has confidence Manuel can handle that, and Manuel has showed no lack of confidence on his end.

No one will confuse Smith and Manuel with the dynamic trio of the 2012 draft (Andrew Luck, Russell Wilson and Robert Griffin III) any time in 2012, or maybe ever. But as a duo, Smith and Manuel’s respective auspicious starts well exceeded expectations.

Manuel was impressive in his rookie debut, though. He was actually much better than I expected him to perform. He rushed his throws a couple times due to pressure from New England, but held up well inside the pocket. He relied on check downs and screens to his running backs a little too much, but he also has great players for that role in Spiller and Jackson.

The kids were all right, weren’t they? They only went a combined 1-2 in their high-profile regular-season debuts, but the Jets’ Geno Smith, the Bills’ E.J. Manuel and the Raiders’ Terrelle Pryor all exceeded first-week expectations for the struggling teams they hope to lead at quarterback.

Manuel came within five seconds of getting his first career win, but New England broke Buffalo’s heart one more time with a 23-21 win that was secured on Stephen Gostkowski’s 35-yard field goal. Manuel didn’t have a ton of passing yards (18-of-27 for 150 yards), but his two touchdown passes were nearly a death blow to the Patriots, who slopped their way to a 10th consecutive opening-day win.

The most impressive part of Manuel’s game was how he took care of the football like a veteran. While the Patriots’ Tom Brady threw one interception and committed a costly fumble near the Bills’ goal line in the third quarter, Manuel had no picks and no fumbles. He did his part to help Buffalo get just its second win in its past 20 games against New England, but the Bills’ defense couldn’t protect a 21-20 lead in the closing minutes.