The Bills have a new starting quarterback and he’s awesome, for now. That’s the thing about being the Bills quarterback; we all love you until you fail. Tyrod Taylor probably… 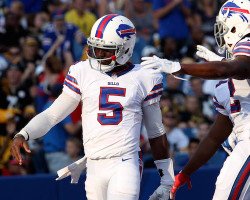 The Bills have a new starting quarterback and he’s awesome, for now. That’s the thing about being the Bills quarterback; we all love you until you fail. Tyrod Taylor probably won’t be as good as Jim Kelly, but I’m hoping he’s not as bad as Todd Collins. The bar isn’t set high. In fact, the bar is super low. The bar is near the earth’s core. 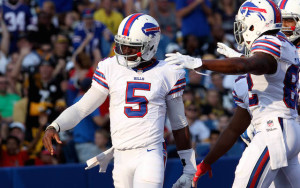 Tyrod hasn’t even stunk yet!

Right now, Tyrod Taylor is my favorite Bills quarterback since Jim Kelly. That’s not saying much. We’ve been walking the Gobi Desert of quarterbacking since 1996. Listing your favorite Bills QBs since Kelly is like listing your favorite places to be punched. You don’t love being punched in the arm, but it sure beats being punched in the face or the groin! I sure hope the Bills read this and then rush out to print up some “Buffalo Bills Football – Only Get Punched in the Arm!” bumper stickers.

I’m excited so excited about 2015 that I’m not afraid to look back at the pit of despair that has existed since the Bills last playoff appearance. It’s time to list my favorite Bills quarterbacks since Jim Kelly. 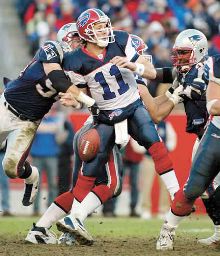 Drew Bledsoe – I feel bad when I think about Big Bad Voodoo Daddy. Every time they Google themselves, they have to read about their eternal association with Drew Bledsoe running out of the tunnel in Ralph Wilson Stadium wearing the most god-awful jersey ever created. They’ve done other things!

Drew Bledsoe had some moments. There was the amazing 2002 overtime win over Minnesota in week 2 and the 31-0 season opening win over the Patriots the next season. Bledsoe had a season and a half that made football fun again. What lingers is the vision of Bledsoe being sacked again and again. His giant frame slowly dragged down to the earth like Gulliver. I can’t believe Drew Bledsoe is my third favorite Bills quarterback. I feel sick.

Ryan Fitzpatrick – The Fitz beard… the Fitz scream… the Fitz McDonald’s engagement story. I wanted so badly for Ryan Fitzpatrick to win here. I still want him to be successful because he seems like the coolest guy ever. He was the Amish Rifle! What’s not to like? Well, other than his quarterbacking.

Alex Van Pelt – It’s 2001 and my dad and I are watching the Bills lose to New England toward the end of another abysmal season. The announcers are talking about how smart Alex Van Pelt is and how he will eventually be a great coach, followed by Alex Van Pelt throwing an interception. My dad yelled, “If he’s so smart, how come he keeps throwing it to the other team?” 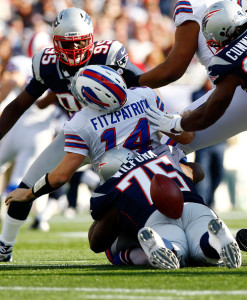 The absolute best thing about Alex Van Pelt was the Alex Van Pelt radio show with Shredd and Ragan where they used to talk about his hot wife.

E.J. Manuel – He seems like a really nice guy. The Bills have had a lot of really nice quarterbacks. If I were an NFL GM, I’d acquire really good quarterbacks, but being nice is a fine quality, too. The world needs more nice people. Sometimes, it’s not about winning and losing. Sometimes, it’s about losing. With E.J. Manuel, it was mostly about losing. The good news is, he’s nice and we’ll probably see him again soon.

Trent Edwards – One of these days, I’m going to walk into a Dave & Buster’s and stand next to Trent Edwards while he’s playing a first-person POV shooting game. I’m going to say things like, “Trent, there’s a zombie right there in the middle of the screen. Shoot it. There are zombies everywhere, Trent. They’re all over the screen. Just shoot them. Who cares if you miss? You’re going to die!” Trent will say things like, “Not yet. I don’t have a good shot.” And the zombies will kill Trent Edwards. And then we’ll all put another quarter in the machine and watch it happen… again and again.

Thad Lewis – Are we sure he wasn’t good? Has anyone checked on Thad Lewis 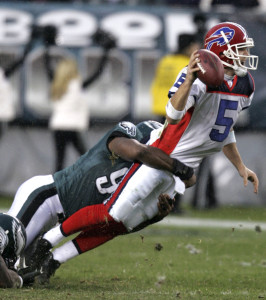 “Wait a minute… I’m almost ready to throw it…”

? I fear that this guy is going to be brought up in every bar conversation about Bills quarterbacks for a couple of decades.

Matt Cassel – I’m not going to pretend like we’re not going to see Cassel by week 4, I’m just hoping we won’t. Unless he’s awesome, which he probably isn’t.

Kyle Orton – He looked like the jerk older brother from every 80’s movie and, for a couple of seconds, we thought he was the one. Those seconds were fun. Remember those seconds? I miss those seconds.

Kelly Holcomb – I can’t remember a single moment of the Kelly Holcomb Bills era. Maybe it didn’t even happen. The official stats say that Holcomb played eight games, but you can’t believe everything you read on the internet. Holcomb still ranks this high on my list because his first name is the same as Jim Kelly’s last name.

J.P. Losman – I’ve blocked out most of this. I remember a nice touchdown throw to Peerless Price… and something about Yoda. 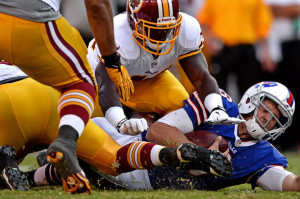 Billy Joe Hobert – Sure he was terrible, but I remember in 1997 when the Bills had to play five preseason games and Hobert said, “Whoever made that schedule should be shot.” Hobert liked saying what was on his mind. Too bad he didn’t like reading the playbook.

Rob Johnson / Doug Flutie – They are one person for the rest of my life. And, they’re not even a person; they’re an entity. Johnson/Flutie is a putrid ball of gas, floating through the stratosphere. It’s lingering hate on the end of a telephone line. Johnson/Flutie wasn’t a quarterback. It was a dumb argument that was never won by either side and yet still raged on for years after it was over. Johnson/Flutie is poo. I hate it.