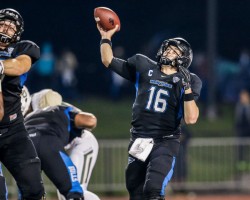 Lance Leipold is 109-6 as a head coach in college football.

He’s gone undefeated in five of his eight seasons, won six national championships, and has taken his talents from DIII Wisconsin-Whitewater to Amherst, NY where he’s about to lead the UB Bulls into the 2015 season.

On today’s podcast, Scott Wilson and I give you an idea of what to expect when the Bulls kick off Saturday against the Albany Great Danes.