When it comes to information about NFL teams’ interest in draft prospects, we just don’t know what’s true. It’s cute to say that you should take everything you read/hear “with… 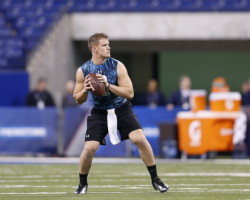 This Is The Only Pre-Draft Report You Need To Read

When it comes to information about NFL teams’ interest in draft prospects, we just don’t know what’s true.

It’s cute to say that you should take everything you read/hear “with a grain of salt” but that’s a massive understatement.

Let’s use one CBS Sports article from last year to illustrate the point.

Is Ryan Wilson telling us that the Bills, as an organization, are worried that the Jets will select Syracuse QB Ryan Nassib with the ninth overall pick in the 2013 NFL Draft, taking him off the board right after the Bills pounce on him with the eighth pick? That doesn’t even make sense.

It’s cool though because the use of the word “report” tells us that he’s just telling us that someone else says that the Bills are worried. Moving on.

Specifically: The Bills, who hold the eighth-overall selection and are in dire need of a franchise quarterback, could be in the Nassib business. (It doesn’t hurt that first-year coach Doug Marrone was Nassib’s coach at Syracuse). The predraft monkey wrench: the Jets, with selections No. 9 and No. 13, like Nassib a lot, too.

This still doesn’t make sense but at least we’ve established that Ryan Wilson KNOWS that the Jets covet Nassib, right?

This is the latest speculation, anyway, courtesy of ESPN’s Sal Paolantonio, who reported Wednesday that the Bills believe that the Jets have legitimate interest in Nassib. And if Buffalo doesn’t take him eighth overall, New York would have three chances to get him (the aforementioned ninth and 13th selections, as well as pick No. 39) before the Bills go back on the clock with pick No. 41.

Guess not. How far removed from this information is our author? Well, Ryan Wilson is reporting that Sal Paolantonio is reporting that the Bills believe that the Jets want Nassib so… really, really far. That’s not anything then, is it?

This is no doubt part of the smoke-screening that goes on in the days leading up to the draft, where obfuscation rules and the truth is scarce. That said, if the Bills truly like Nassib, they’ll have to decide if he’s worth a top-10 pick, or if the organization would instead be comfortable facing him twice a year should he end up with the Jets.

Wilson’s post is no doubt part of the “I have to fill column inches even though I don’t have any information whatsoever” process that goes on in the days leading up to the draft. Facts are scarce… so make something up and then react to it as if you didn’t. Nice play.

How does the draft play out?

At best, Nassib was the Bills’ second-favorite QB in the draft and the Jets’ third-favorite… and there’s really no reason to even believe he was that high on either team’s board. Nevertheless, one day before the draft began, the above is what passed for “information.”

So, when you hear that the Texans have narrowed their options for the top pick to two players (Clowney and Manziel), just remember…