When you explain your booing, it actually makes less sense. 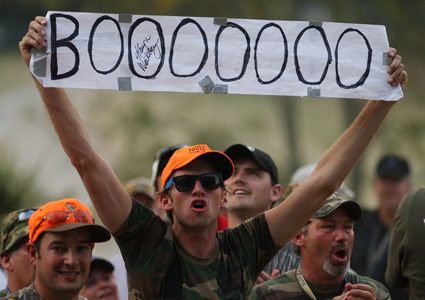 So, Sabres forward Steve Ott states, as amicably as possible, “Home ice advantage can be real and fans play a role. You know that super fun thing you do when things are going really well? Maybe try doing that when they aren’t going well, too. It could help.”

It’s no surprise that those who thinking booing the team has a positive impact on anyone or anything miss the point entirely.

As dumb as booing may sound, the justification for it sounds ever dumber.

@ottern9ne its even harder to cheer for a shit team

Even harder than what?

@ottern9ne The sabres are almost last in the league, Buffalo is a hockey town.Maybe if the team showed a little desire to win. #7thMan

“We can inspire you? Well, maybe you should inspire us to inspire you! Ha!”

@magikalrhiannon @ottern9ne the players are put on the ice by the owner. They should be used to and expect the boos. Especially this team — Patrick McGrath (@pmcgrath39) February 19, 2013

Yeah, we’ve come to expect them. Why do think we’re having this conversation?

BUT WE HAVE TO BOO!

@ottern9ne nobody wants to boo their home team…we’re just getting sick of the half ass efforts that we spend our hard earned money on….. — Dennis Eckert (@dpejr22274) February 19, 2013

Right, but you’re missing the point.

@ottern9ne If boos had name tags you would know who they were directed at.Otter you’re in good favor with this town,keep up the good work!

So, you’re not trying to ruin the atmosphere for me? You’re only doing that to my teammates, coaches, front office, owner, and the rest of the fans? I stand corrected. I’m now inspired.

So it’s Ryan Miller’s postgame interviews that are inspiring the boos? Glad we’re having this talk. It’s tough to pick that up in the context of the game.

@ottern9ne If you listen closely, you’ll hear me whispering it in your ear on the bench. #LetsGoBuffalo #Sabres — Lindy Ruff’s Tie (@LindyRuffsTie) February 19, 2013

This is actually true.

Yep. So maybe cheer/chant/inspire rather than boo/confuse/annoy? Just a thought. Do what you want.

@magikalrhiannon @ottern9ne u forget in BUF we have had mediocre teams and have had enough we expectmore that’s y we’re tough on the Sabres — Cory Thie (@crt32590) February 19, 2013

Is this about Dick Jauron now?

@ottern9ne if you guys can get a playoff spot, or hell, get a nice win streak going, you’ll hear a deafeningchant, it’ll give you chills.

Thank you! After we make the playoffs, we’ll certainly appreciate the energy that you will retroactively supply during the regular season that will have just concluded!

@ottern9ne start winning more and you will hear the FNC like you never heard anything like it.We are not Dallas fans. We know hockey

The booing only SOUNDS really stupid. It’s actually very astute and rooted in the community’s exceptional base of hockey knowledge.