Note: This will be full of hyperbole, will not use research except for the rolodex that is my brain, and is totally written based on what the Sabres’ have done… 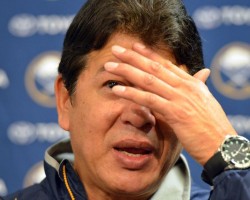 Note: This will be full of hyperbole, will not use research except for the rolodex that is my brain, and is totally written based on what the Sabres’ have done to my mental state.

The Sabres’ two year, public plan known as Operation McEichel was almost foiled last week by Ted Nolan. The plan originated with former Sabres’ General Manager Darcy Regier, who was able to convince the Pegulas that a two year Lose-a-thon was a great way to get the team back on track. The idea was so good, that when Darcy joined the Arizona organization, he was able to convince Coyotes’ management of the same.

The idea was SO good in fact, that when Darcy was fired, new Sabres’ GM Tim Murray was able to convince Terry and Kim that the plan put in place by the guy they just canned for incompetence, was the right one. Operation McEichel, which consists of a plan to lose, lose some more, lose more than that, and keep losing, was feasible and logical enough that Murray could stay the course while putting his own stamp on the project (such as hoarding draft picks, adding young talent through sneaky trades, and showing no fear to make a major splash by acquiring Evander Kane and Zach Bogosian). Everyone bought in and the plan was a slam dunk.

Then LaFontaine came for a visit, joined the payroll, flaked on the organization…again, but put his stamp on the team by getting Ted Nolan hired before he left. Hiring Nolan for a second time was probably the worst front-office decision the team has made that didn’t involve Larry Quinn.

In fairness, the team ended up with a few gains by hiring Nolan:

There is no evidence that Murray ever directly told Nolan to lose, but there has been plenty of public understanding about the direction of the organization. The Pegulas seemed to do everything they could do to buy into the tank; Murray made every move possible to make the team immediately terrible while securing a bright future; Nolan defied the organizational philosophy over and over again.

A team doesn’t have to lose ON purpose when a plan is to lose WITH purpose. Teams can lose ethically and with integrity, but Nolan decided, or maybe proved, that he isn’t diverse enough to keep a locker room together without winning being the sole motivating factor. Brian Gionta is a strong captain, and Murray seemed to lean on him (especially during the trade deadline), to get the temperature of the team, instead of Nolan. This was one of many signs of the friction in the zoo.

The most frustrating part of Nolan 2k15, isn’t what his seemingly spiteful attempt to de-rail Operation McEichel would have done to the Sabres, it’s what is could have done to Western New York. (Warning: I’m a Buffalonian, so I think in extremes). After years of organizational planning and extreme patience by both hard-core and casual fans, not getting one of these future superstars would decrease regional interest in hockey, even if just for a short term. Another outcome of a plan not working out is anger pointed at the owners.

If locals get mad at the Pegulas, it could impact everything in Pegulaville and spread to everything they have their hands in. If Buffalonians turn on the Pegulas, what reason do they have to keep pouring money into the region? Will other rich investors be lured to the increasingly improving area if the area stops improving? Will the Bills get a new downtown stadium? Will the re-birth of concerts at The Ralph, and the increased amount of concerts at the Arena continue? Will the clubs and shops around the arena continue to thrive when less people care? What happens to the waterfront momentum and development?

The answers are bad, and the hope and vision for Buffalo 2020 turn into Buffalo 2050. The region can easily revert back to old habits and we’ll be back to seeing the cynical stay, while businesses, jobs, yoga classes, and our kids leave. Climate change will cause the lake to rise and the waterfront will be underwater. The common core/standardized testing issue will never die so kids will just stop going to school. Instead of tearing down the skyway, another one will be built next to it.

After tiring of Peace Bridge talks, Canada will invade the region, taking over all of the great lakes and all the bridges. The power from Niagara Falls will be used to power Canada only, and during the takeover they’ll take our wind turbines, too. The rest of the country won’t care, except Texas, but they secede from the US instead of coming to help. With all the new borders on the American side, Canada will realize they have an immigrant problem, and put up 400′ walls along the border, and Buffalo will never see the sun again.

All of that would have happened had Ted Nolan succeeded in his tunnel vision definition of what winning means. Luckily, Columbus took care of Nolan’s stupidity. Nolan has been given two legitimate chances by the Sabres to develop a team within the vision of the organization, and failed both times. He has failed three times if the (admittedly, low-ball) offer he walked away from is also counted.

During his first run, Nolan was bull-headed and through a warped sense of pride, chose to get into a mess with NHL legends John Muckler and Dominik Hasek, and lost. This time around, through that same ideal, he chose to try and undermine another formidable hockey family in the Murrays, and lost. He tried to undermine Ownership and Executives by taking down Operation McEichel, and lost.

Nolan tried to do all of this by winning games, and in the end, he lost too many games to win his battles. So he lost. Nolan had no clue, has no clue, and one questions if he will ever get a clue that the games he plays are not what NHL coaches do. If he feels happy walking away from this team, he shouldn’t.

If Nolan thinks losing isn’t in his DNA, he needs a new geneticist.