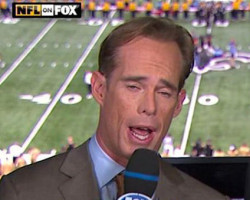 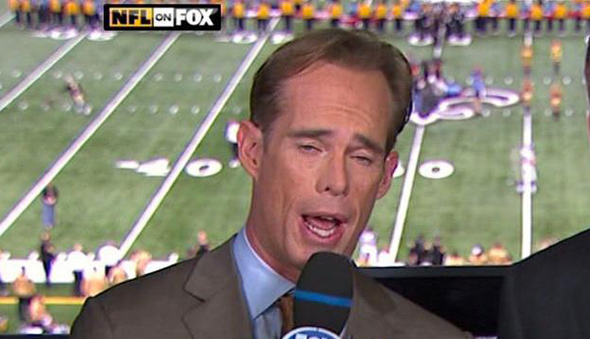 “Sincerity– if you can fake that, you’ve got it made.” —  George Burns

Jack Buck was one of the greatest sports announcers America has ever produced. The old school announcers consisted of men like Buck, Pat Summerall, Curt Gowdy, Vern Lundquist, Tom Brookshier, Lindsay Nelson, etc.  Jack had midwestern values, a stirring baritone voice, unwavering, efficient delivery, often letting the action speak for itself, shepherding the listener rather than browbeating them with petty, prepared axioms. The senior Buck was a man who left his ego at the door.

Joe Buck has zero in common with his father, sans a last name and genetic code overlap. One might think his middle name is Damien– smarmy, smug, sanctimonious, self-assured and as sincere as a repentant politician or Nick Saban professing his current job satisfaction. If Joe could just spend twenty-four hours a day looking into a mirror, he’d probably have no use for women.

Joe does play-by-play like he’s doing the world a favor. His tone, manner and delivery are as calculated as a Machiavellian political gambit. This is not an insult; it is not easy to master the art of indifferent certitude.

For years he paired with the workman-like Tim McCarver on baseball, but McCarver’s “early retirement” has rumors aplenty and many wondering what the real story is. McCarver has bitten his tongue in recent interviews when asked about who might be behind it, and his professional and personal relationship with Buck.

We will never forget a FOX promo series where they dressed Madison Avenue Mad Men-style Joe in a black leather jacket, slicked his hair back and paraded him around New York smirking, posing, flirting, mingling and making small talk with the citizens. We could have sworn it was meant as some form of self-deprecating humor to promote his image, but it wasn’t. No, having Joe walk up to people on the street and talk to people like Bill Murray’s slippery chameleon lounge singer on the old Saturday Night Live wasn’t an act. This was how he interacted with regular people; a self-absorbed narcissist who could barely feign interest in anything a nine-to-fiver had to say to him since his attention span could not spare that much time away from concentrating on his own vainglorious reality.

So we guess that is why it looked like he could barely comprehend their molecular existence and treated them like pesky gnats that should be shooed away after he was finished enlightening them with his snide, vapid snippets after their brief encounter.

It is a well-known tradition in Green Bay, if not necessarily the rest of the country, that some of the Packer faithful will “moon” the visiting team’s bus when it leaves Lambeau Field, especially after a loss.  Now Joe Buck was aware of this too, and had even laughed about it with some print journalists before a Minnesota-Green Bay Playoff Football game on January 10, 2005.

Then during the game, Randy Moss infamously pretended to “moon” the Packer faithful after one of his two touchdowns, rubbing it in, as the heavy underdog Vikings pulled away to a 31-17 lead and eventual final score win over the double-digit favorite Pack.

But Joe, privy to the knowledge of rumors that the controversial Moss might pull out this special celebration, had his own preplanned reaction.

When it happened, he acted as if the attack on Pearl Harbor had just occurred in the end zone at Lambeau, and he instantaneously appointed himself the moral watchdog for America as he constantly repeated his new found mantra for the mentally-deficient and easily offended:

But like all things with Joe Buck, it came off as cynical, sanctimonious preparation masquerading as spontaneous righteous indignation. The public seemed to sense that Joe was waiting in ambush to spring with this canned cheer for common decency, long before the Moss Eclipse ever took place. [ Yes Joe, what will we tell the children? ]

In the end, both Moss and Buck came out of it poorly– Moss as a boorish vulgarian and Buck as a stuffy, insincere self-promoter, trying vainly to establish his own Hester Prynne themed “Do you Believe in Miracles?” moment in the annals of broadcasting one-liners.

Recently, Joe Buck met Randy Moss for the very first time face to face in the halls of Fox Sports, not surprising since the retired Mr. Moss is also working for the Murdoch Network. Apparently, Mr. Slick wanted to test the waters as to Randy’s feelings about the mooning incident. Joe Buck yelled down the hall at Moss who was already talking to someone else, in that somewhat rude “I’m cool with the hip vernacular of today” swagger of his:

Apparently Moss at first wasn’t even sure who Joe Buck was, and the third party filled him in. Face-to-face, Moss seemed puzzled as to what any of this was about and why Buck seemed to care so much about something that happened eight years ago.

“I don’t know if we’re good. I don’t even know you. Let’s just say I played the game, you analyzed it, you said what you said, I did what I did, and we moved on. How about that?”

How about it, Joe?

Are we all good with the fact that not everyone cares about the overblown minutiae that you consider Shakespearean magnitude moments in your broadcasting career… not even the sole subject of your proudest “Scarlet Letter” moment of puritanical piousness?

The “coup de gras” moment so far in Little Buck’s Career without a doubt, was his foray into entertainment television. The short-lived “Joe Buck Live” Show on HBO was the ultimate in train wreck television. In an effort to expand Joe’s range, some producers, managers agents and opportunists decided to give the Pompous One his own uncensored “no holds barred” variety interview show on the cable network.

To eclipse the failure/unnatural disaster standards of previous “sports world figures turn Ed Sullivan/Johnny Carson” takes quite some doing. Anyone who saw the 1970’s Howard Cosell Variety Hour which painfully ran for an entire summer, or the torturous Magic Johnson Show which briefly replaced the cancelled Arsenio Hall Show in the early 1990’s, the obscure Dick Beddoes Show that followed mid-week Toronto Maple Leafs games in the 1980’s, or any of the multitude of  Ambien substitute interview shows that Phil Simms has hosted over the years knows what we are talking about.

But “Joe Buck Live” was a show that hit new levels of sub-basement bedrock in the “squirm while you watch it” category of discomfort for the viewer, kind of like watching a real life version of Ricky Gervais’ self-deluded character in the original English version of “The Office.”

We would kill to have the DVDs of these shows.

The best one was the very first show in June of 2009, when comic and frequent Howard Stern guest Artie Lange was booked on the show. He followed uninspired segments and guests– Brett Favre, Jason Sudeikis, Michael Irvin, Paul Rudd and Chad Ochocinco. The jokes were lame. The interviews sucked. Buck tried to smirk his way through awkward silences and a silent studio audience that at times gasped as if they were witnessing a live cable television version of the Spanish Inquisition.  Joe could not think quickly on his feet– no surprise to us. Although this guy has fabricated spontaneity his entire career, a handful of prepared responses and jokes cannot carry you through a live 90 minute show.

When Artie Lange came out, he was loaded for bear. He later claimed that the show’s producer & HBO Sports Programming President Seth Greenburg told him backstage to “Go nuts!” because Rudd and Sudeikis were killing the show. Lange also said that Joe Buck told him backstage to really come after him. “I can take It!”

So Lange came out and followed direction. He cursed, told jokes and called Tony Romo’s then girlfriend Jessica Simpson fat, saying she looked like Chris Farley. After hearing this, wet blanket Joe sounded genuinely offended and donned his white knight armor in declaring in his typical pompous tone that Lange was out of line. Artie put his feet up on the table, Joe got visibly angry and told him to take them off. Lange responded:

“Why? Somebody should look natural doing this show.”

When Artie balanced a lit cigarette on his chin, …. Buck, seeing an opportunity zinged “I think it’s in chin number four.”

Artie retorted: “Number Four? The show you won’t get to. You’re out of your league Buck. Stick to play-by-play!”

Then Artie hit him with a string of funny, but unprintable obscene bombs that left pieces of Joe Buck all over the studio. Joe sat open-mouthed, dazed and confused, and some in the studio audience were laughing so hard they actually (really) fell out of their seats.

It was kind of like watching Kermit the Frog try to win an 8 Mile-style puppet put-down-throw-down with “Triumph the Insult Comic Dog” and “Ed the Sock”.

Joe looked visibly upset and all the spin-doctoring in the world after the show couldn’t save this turkey. In the end, thin-skinned Joe could not handle that the audience was laughing at him and not with him and you can’t totally hide that on live television either.

They gave him only two more equally bad but less entertaining shows in the coming months (probably contractual obligations) but Artie’s prophecy proved correct. He never got to the fourth show.

Michael Irvin summed it up best when he commented after witnessing the slaughter in person, sitting on the guest coach on the premier show:

“I hate to see white-on-white crime.”