There’s a “Bills are likely to draft Manti Teo” joke in here somewhere.

Knee jerk reax to Nix convo– 1) Not OK to do what the kids did. 2) Not OK to post like Deadspin did. 3) Not our problem. #eatingitup

Here are the next 9 thoughts that came to the collection of minds at TrendingBuffalo Global Headquarters.

4- There’s a “Bills are likely to draft Manti Teo” joke in here somewhere.

5 – The Bills have a GM who uses the word “dadgum” during official conversations.

6 – GMs don’t have cold, impersonal interactions like they do on X-Box (stick tap to Ted Black). It’s about relationships.

7 – Thinking “OK” when hearing “Hey, the GM of the Bucs wants to talk to you” does not make Buddy Nix a sucker.

Don’t think Nix’s thing was an old dude thing.Not sure where he was supposed to spot the ruse. — Alexander (@CriminallyVu1ga) March 12, 2013

If you’re making fun of Buddy’s age, you might want to search Mark Dominik. He just turned 42. Could happen to anyone — Matthew WGR (@MatthewWGR) March 12, 2013

8 – Maybe everyone should stop interviewing coaches, players, and front office personnel. The information is shown to be useless when compared to a few minutes of a guy with his guard down.

All sports talk is an act of either being lied to or deciphering the lie. Honesty happens only when mistakes are made.

9 – “We’ve seen Fitz do it before and we think we can do it again” will never hold any water again.

@trendingbuffalo am I ok to feel better about Nix after this? He’s actually gained a little more respect from me with those observations

10 – Nix is just as befuddled about QB position as fans are– not sure if it’s good or bad news.

11 – It doesn’t sound like Fitz is getting a $3 million check tomorrow.

12 – There’s a reason we were using the word “FitzMagic.” It was an ILLUSION.

BONUS – This would have been 100x more fun if this were a Darcy Regier phone call. 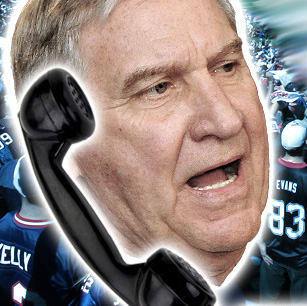