No one is immune to taunting. 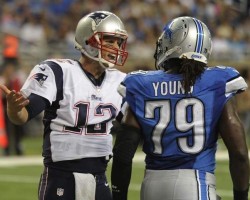 Read this, Stupid! Read This! You Can’t, Can You? (NFL Taunting Column)

“Come back here so I may taunt you a second time!”

Who taunts people? Who the hell cares if people taunt people and, even if they do, to what degree should we allow this taunting?

Throwing a little yellow flag at a 300 pound millionaire because he said mean things to a 240 pound millionaire on a field where they just attempted to open each others skulls with physical impact is about as ridiculous as using an antiquated, highly inaccurate chain system to determine a 10-yard distance in a billion-dollar industry.

I don’t care about taunting. That sounds stupid coming from a guy who is writing about the topic but, taunting means nothing to me. I’ve been taunted. I’ve taunted my dog. No one is immune to taunting. Taunting happens.

I can’t run fast. Perhaps if I could run fast I would feel the need to taunt someone. I’ll never know.

I’ve also never played football all day with a guy trying to beat me up. That guy probably talks a lot during the game. I’m sure, by the 4th quarter, I’m pretty sick of his face. If I gained 12 yards on a guy who wouldn’t shut up, I’d be pretty happy about that 12-yard gain. I’d be inclined to let that guy know just how good gaining 12 yards felt.

Of course, if I did, I’d get flagged. Flags are bad. Flags make my football-watching experience less pleasurable. I’d be happy if everyone just played fair and didn’t cheat but we’re not a highly principled nation, especially when money is involved.

The NFL has decided to cut down on taunting. I feel that this new policy is misguided. There is a lot of holding going on that they haven’t policed yet. They should shift their focus to the holding instead of the taunting.

Taunting penalties are confusing. We see some taunting that doesn’t get flags. I have to wonder what refs are allowing and what they’re penalizing. Are they grading the taunts? If it’s a really good ‘Yo Mamma’ joke or a precious sarcastic barb, do they look the other way?

Did NFL officials have to sit in a room and watch ‘Slap Shot’ and ‘Friday’? Did they have to pair off and practice taunting each other like some kind of D.A.R.E. class? Is there a book of prohibited taunts?

I don’t think that NFL officials should be authority figures on taunting. Old rich men do not know a good playground taunt. Old rich men taunt me when I ask for credit. It’s a refined, understated taunt. They say things like, “Your request was insufficient.” How many yards is that taunting penalty?

I’m sure that taunting penalties are a small part of the overall attempt to clean up the game of football. Sure, don’t taunt. I get it. Maybe, if NFL players stop taunting, kids will stop being pricks, calling their Mom stupid because she won’t let them have a Snickers in the line at Target. If that’s the end-game, I’m a little more on board. I don’t think it’s going to happen, though.

Maybe concentrate on NOT allowing your players to light up strip clubs with violence and kill people with their cars and then play more football. Maybe find out more about why they’re unloading shotguns into their chests to preserve their brains. That’s only if the whole ‘taunting’ thing is keeping you up at night.

Taunting is bad. When I was 8, my family stayed at the Sheraton Inn. My brother Donny brought me down to the pool and threw me into the deep end. I doggy paddled for a while and then swam to the side when I got tired. Donny chased me down and threw me back into the middle. I got more tired and tried again to get out. Donny caught me and threw me back into the middle of the pool. This continued for about 10 minutes until I just sank to the bottom and Donny dragged me out and punched me in the stomach. That’s a 15-yard taunting penalty!