Here at TB, we’ve been raving about UB linebacker Khalil Mack for as far back as we can remember. Months ago, we told you that it wouldn’t be surprising if… 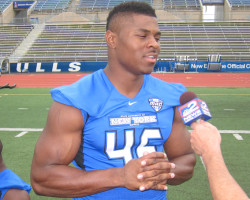 Here at TB, we’ve been raving about UB linebacker Khalil Mack for as far back as we can remember. Months ago, we told you that it wouldn’t be surprising if Mack wound up being the first non-QB off the board in May’s NFL Draft. Others are now getting on board with rumblings of the Houston Texans considering selecting him first overall.[/alert]

From Rob Rang at CBSSports.com:

OLB Khalil Mack, Buffalo (6-3, 248, 4.66): With an FBS-record 16 career forced fumbles and record-tying 75 career tackles for loss, Mack’s statistics jump off the page. Against the most gifted opponents he faced this year (Ohio State, Baylor, Connecticut), it was his game that jumped off the screen. His size, instincts and agility as an edge rusher make him equally intriguing to teams operating out of a 4-3 or 3-4 alignment. Versatility could land him a spot in the top five. Some even view him as a dark horse candidate for the Texans at No. 1 overall.

See below for more quotes about the UB star but first, let’s take a look at Mack’s trip to the NFL combine.

Khalil Mack did 23 reps on the bench press this morning, two more than Clowney. Will run the 40 yard dash at 1 pm. #NFLCombine #UBBulls

Khalil Mack’s official 40-yard dash time was 4.65 – 4th best among all of the linebackers. #NFLCombine #UBBulls

“He’s one of the best two or three players in this draft,” NFL Network draft analyst Mike Mayock told Twin Cities radio station KFAN at the league’s scouting combine. “I’m going to tell you right now, I’d take him with the first pick. That’s how much I think of Khalil Mack.

“You talk about a guy like Clowney, who’s just got superhuman abilities, versus this kid, and if I had a choice between the two, I think I’m going Mack.”

“Here he is a kid from the University (at) Buffalo, and you put on the tape and he dominates Ohio State (in the 2013 season opener) like nobody I’ve ever seen dominate them,” Mayock said. “He’s explosive off the edge, he’s tough, he’s twitchy, he’s got a little edge about him. When I watch him on tape, I feel like he’s pissed off at the world, and I like that.

“Then you put on a tape, I think it was Kent State, and he drops into coverage like a safety, reads the quarterback’s eye, undercuts a route, one-handed interception. And I’m going, ‘What can’t this kid do?’ I’m thinking he must be a bad kid off the field, and then I find out he’s a really good kid off the field.”

‘All the talk that he’s generated for himself, he certainly deserves,’ Briles said about the linebacker. ‘He’s a big time, good football player. If I had to compare him to somebody, I watched two or three plays and said Von Miller.’

‘They’ve got a kid that kicked our tails, that outside linebacker, had a couple of sacks [and] pressures,’ Meyer said. ‘I know he beat guys that I expect to play very well on our offensive line.’