A whole heap of NFL experts, analysts, and pundits have been talking up the 2012 Buffalo Bills since the free-agent signing of Mario Williams. Even the national heavy-hitters have been out in force. [read more]

A whole heap of NFL experts, analysts, and pundits have been talking up the 2012 Buffalo Bills since the free-agent signing of Mario Williams.   Even the national heavy-hitters have been out in force.

“With Mario Williams on the left side, Dareus and Kyle Williams at tackles, with him coming over the weak side, the Bills front 7 has the chance to be dominant… I think the Bills can really surprise some people this year” 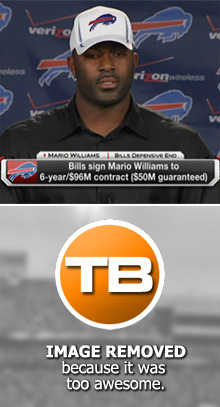 olin Cowherd from ESPN recently gushed about the Bills and their offseason. He described the defensive front as “MASSIVELY” improved and named them as his “pop” pick of the season thinking they can make the flip from 6-10 to 10-6.

John Clayton from ESPN was recently on WGR Sportsradio 550 heaping praise on the Bills for their offseason and draft. He said with the exception of Detroit, the Bills might have the best defensive tackle combo in the league and thought Buffalo will be a “surprise” team this year.

Don Banks from Sports Illustrated mentioned he has a strong hunch that the Bills will have a legitimate shot at taking out the Pats.

The Bills are closer to dethroning the mighty Patriots in the AFC East than the big, brash Jets. Rex Ryan might love his team, or at least profess to, but it says right here they’re not even the second-best team in the state of New York. That would be the long-downtrodden Bills, who can rightfully lay claim to having the best offseason in the league.

The Bills have made moves to get better. Maybe a lot better.

Senior NFL Columnist, Clark Judge from CBSSports.com cites the Bills as a 2011 “also-ran” that has a good shot at getting to the playoffs.

With the defensive additions the Bills just made, I like their chances of finishing second in the AFC East and producing their first winning season since 2004.

So with these big-time glowing endorsements… surely Vegas must have taken note, right? WRONG.

Online sportsbooks 5Dimes.eu and Betonline.com have the over/under for Bills total wins in 2012 at only 6.5.  Cantor Gaming, which has already posted point spreads for the entire NFL season doesn’t look much better.

So, what gives?  What side are you on?  Are the Bills easy money or sucker bet?

When I was was in Vegas last month… I figured what the hell? 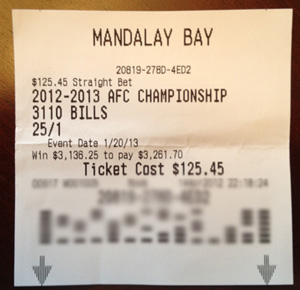 I’m in for a hell of a Vegas weekend if this cashes.