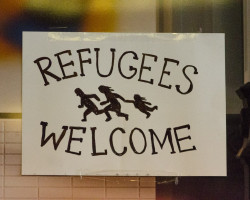 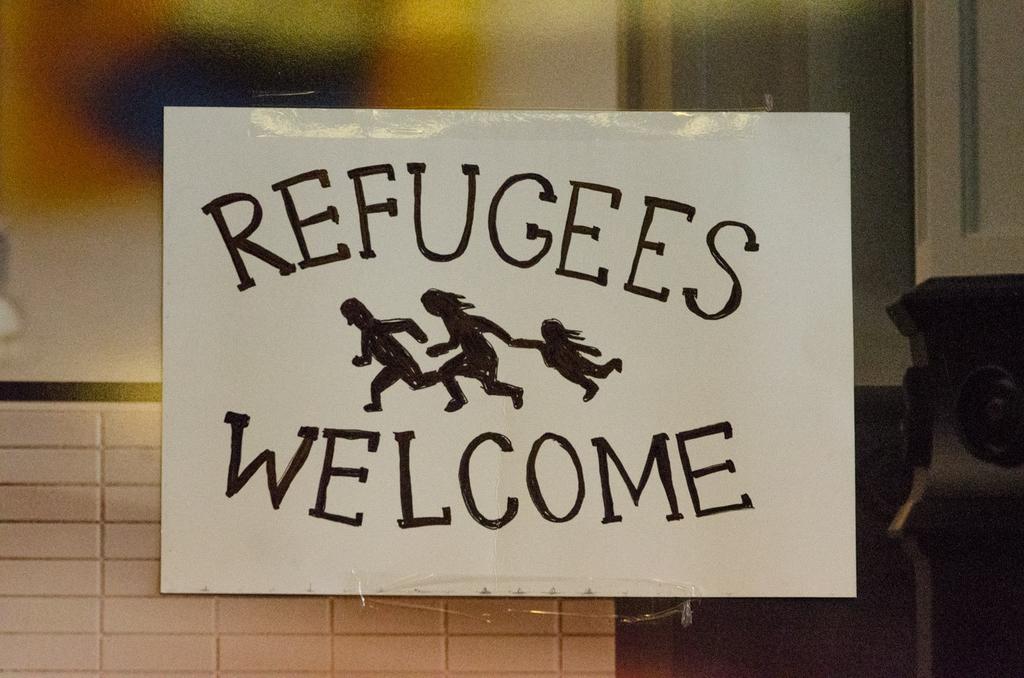 Happy American Thanksgiving. Hope everybody is safe, happy, enjoys the football & doesn’t engage in divisive topics of conversation such as religion, politics or the College Football Playoff Committee.

{ …. Let’s also hope Grandma cooks the bird long enough so that the centre of the stuffing inside the body cavity gets enough heat so that all traces of Salmonella bacteria are irradiated.}

…… Of course with the events in France, the endless current political campaign & the collective vulnerability felt when travelling long distances to be home with family make 100% avoidance of these topics unlikely.

…. There is presently no shortage of grandstanding mouthpieces telling us what to do about the Syrian refugee crisis.

…… Many politicians & governors have lined up to declare that now is not the time to allow any Syrian refugees into the country. These potential terrorist seeds could eventually blossom into future menaces that could carry out seditious acts. There is a lot of misinformation floating through the Twitter-verse.

…… Despite the fact that America has the strictest vetting process of any industrialized country, requiring 18-24 months before they can first enter the United States, one can never be too sure. The cult movie “Telefon” starring Charles Bronson, Lee Remick & Donald Pleasance made that abundantly clear. If it happened in a movie, it could be cited as fact and soon become a plank in the platform of several Republican Presidential Candidates before the Iowa Caucuses.

….. So not allowing 10,000 thousand fugitives from the abject terror of the destruction of their homeland into the country is a no-brainer and will clearly make us all safer. Now next what we have to tackle to really make us safe is discontinuing those pesky 20 million temporary travel visas into the country every year that require minimal vetting, to say nothing about all the other people coming in via regular passport travel.
…… Donald Trump and others say terrorists pose the single biggest threat to our way of life. { It was illegal Mexican rapists posing as slave wage vegetable pickers last month } They reason that if refugees are allowed to land on our shores unopposed, some might already be killers and others might turn into terrorists & they would wipe out our culture & society.

….. For once we agree with Generalissimo Francisco Franco Trump, Senator Theodore Benito Mussolini Cruz & the rest of the alarmist chicken hawks, because there is precedent for these fears.

……. About 400 years ago there was a refugee crisis that involved a very defined group of intolerant religious fanatics with views very similar to ISIS. These people were forced out of several countries that no longer wanted them. They became refugees.

…. This sleeper cell was forced to travel a great distance across the ocean and land in a hostile, uncivilized wilderness. Despite their hardships, they still held firm to their conservative views that had them leaning towards apocalyptic doctrine, nonacceptance of non believers & resistance to accept new customs. As a result they did not respect, trust or get along very well with the people whose land they arrived in.

…. Being absolutists, some believed that the only way they could deal with these indigenous savages was to gently or forcibly convert all of them to their way of thinking by adopting their religion.

…… Most refused, so the strict dictums of the refugees’ uncompromising faith meant that they would resort to eventually killing off these dangerous infidels, pagans and heathens. Since they were not believers in the same God, it was okay according to their deeply held beliefs to annihilate them since they would not be marching with the chosen into the penthouse afterlife. This started a chain reaction of selective ignorance, obliteration & cultural genocide in the new land. This eventually wiped out most of the aboriginals.

….. In the end these refugees won. Their religious faith provided justification for their methods. This provided a template for future citizens to follow and the eventual conquering of an entire continent. They tried to instill their religion as the more or less defacto state sanctioned faith.

….. It would take another 150 years from the refugees first landing until logic/science/political necessity dictated that founding new secular nations in these lands required minimizing these fanatics’ extreme methods.

….. But in a further effort to soften the harsh historical narrative started by these sneaky refugees, some of their early quasi-true positive efforts at communal food sharing with the natives were emphasized and exaggerated to white wash the more horrific & racist aspects to their story.

…… Much later, during a horrendous mid 19th Century intramural conflict, the leader of the divided land felt a distraction was needed and declared a National Holiday built around the mythology of those intolerant refugees supposedly trying to be tolerant.

…… But we don’t call those refugees terrorists today. We call them Pilgrims and we celebrate their propaganda laced history each November with a truly positive feast of plenty and thanks.

…… We wait with bated breath for one of these nescient politicians to take their reactionary bombast to the next level and call for the banning of Thanksgiving as it is no more than a state sponsored glorification of terrorists who came into the country as refugees.
Thursday, November 26,2015
……… 12:30 pm Eastern Standard Time ………….
Philadelphia @ DETROIT (Even) 46

….. Two in a row for the Lions. New OC Jim Bob Cooter is proving us all wrong. His lack of experience hasn’t been a factor as the Lions have won 2/3 games with him at the helm, including the last two. The upset in Green Bay two weeks ago and then outlasting the Oakland Raiders last week who have lost their defense and gone back to committing drive killing penalties on offense.
…… The Oxford English Dictionary has named its word of the year for 2015. It is not a real word, but the stupid smiling-crying hermaphrodite Imogee. These pictographs have been a real blessing for people who spend 14 hours a day on the internet. They save tonnes of time and don’t require much composition strength. A big improvement on texting those time consuming misspelled short forms of actual words.
…. Soon we will go full circle back to the beginning when we revive cuneiform from ancient Assyria & then progress forward to Ancient Egyptian Hieroglyphics and eventually back to use of the Hindu Arabic alphabet.

….. However, to approximate the fast use of those simple symbol written communication forms would require learning a skill, kind of like taking up shorthand. But that will never happen since that would actually require the humanoid thumb zombies who love Imogees to actually learn an actual disciplined & digit dexterous skill, …. and that would take away too much time away from researching Rhianna’s latest abdominal piercings & debating with trolls dedicated to the gospel doctrine of government sponsored mind control through the release of secret chemicals in jet airliner vapour trails.

…… Like the English language, the Philadelphia Eagles have also gone full circle. To the time frame between Ron Jaworski & Donovan McNabb when they occupied a void of ineptitude seldom seen in Professional Sports.

….. It has not been a good month to be a sports fan in the City of Brotherly Love. Not one of their professional sports teams has won a game in this calendar month. This is bad news for mad scientist Chip Kelly and the Eagles as the usually very understanding fans have nothing positive to fall back on. Sports Talk Radio is on Alert Level Red on the aggression meter.

….. Starting Mark “The Human Hand Grenade” Sanchez at quarterback will do that to followers of a football team. He really stunk last week in the humiliating 45-17 loss at home to the surging Tampa Bay Buccaneers.

….. The Philadelphia offence was shaky enough with Sam Bradford, but is now as reliable as the Russian Athletic Federation’s drug testing laboratory.

….. What is even worse is that the usually decent Eagle defence is now fed up with the constant ineptitude of the offence. They looked like they quit last week. Missed tackles, bad body language, lack of pursuit to tackle & half assed pass defence coverage meant Buc’s rookie Jameis “Captain Highliner” Winston tied a rookie record with 5 touchdown passes.

…. Going into the Motor City can be frightening at the best of times. heading there on Thanksgiving off a short rest, this Eagles’ team could quit on their coach for good.

Pick: LIONS (Even)
Bob: Detroit Even

…… The best team in the NFL ( only temporarily since the cheating, also undefeated New England Patriots have some key injuries ) are the boring Carolina Panthers. They play old school man to man defence most of the time, run a lot up the middle & eat up the clock on long drives. Their annoying, deep voiced QB though looks like a man completely at ease with his situation. Cam Newton may be on his way to an MVP season if they continue to win.
……. We said last week that we weren’t sold on Romo returning and saving the Cowboys’ season. We might have been wrong. The NFC East is still there for the taking because it is flakier than Victoria Jackson on Molly.

…… Best game of the day and possibly the toughest game in the Panthers’ schedule facing a rejuvenated Dallas on short notice.

….. Dallas did play well last week in the intermittent rain in Miami. Romo and the team gained momentum as the game went on before finishing off the once again very mediocre Dolphins. WR Dez Bryant { usually a bigger Diva than your average talent-less female Pop Star } obviously tries harder too when he has his #1 Quarterback back in there.

….. Short week, rejuvenated team with more to play for. At press time, DE Greg Hardy is not under arrest for any domestic assault or public menacing of a female food server who got his coffee order wrong.

…. So we could hope that he might do us a favour and harness some of those deep, unresolved feelings of rage and direct them towards Cam Newton. That is only if Cam Newton steps over the line and performs another celebratory touchdown dance that exceeds the official length of the dance competitions seen in “They Shoot Horses don’t They?”
Pick: COWBOYS (Even)
Bob: Carolina Even
……….. 7:30 pm Eastern Standard Time ……………
Chicago @ GREEN BAY (-10.5) 47.6

…. We made the mistake of backing the Bears last week against Denver before we realized that RB Matt Forte & WR Alshon Jeffrey were out. They lost 17-15 but had chances to win. Chicago decided that field goals weren’t enough, went for a TD and got nothing. Then they could have tied it but failed on a terrible two point conversion call and execution.

…. Green Bay played their best game in two months last week. We don’t think all their issues are resolved with that single win over the Vikings who were due for a loss. Although Forte & Jeffrey have had limited practice time this week, either one coming back will be a boost for the Bears.

…. The Packers probably win, but on a very cold night in Titletown USA don’t expect to see Aaron Rodgers’ main squeeze Olivia Munn sitting in the outdoor seats braving those wind chills and the even more frigid stares from the fans. They still equate her relationship status with the star quarterback to the foundering fortunes of the Packers.