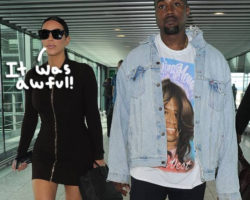 This week the world was shocked by some disturbing news. Surprisingly, this did not involve the angry, orange traffic cone running for President of the United States. No, a great mass of humans on this planet, cognizant of what matters most, went off their Ritalin, and engaged in a texting fury. This was to be expected when they found out that Kim Kardashian was tied up at gun point in France and robbed of whatever value in millions she told her insurance companies her jewels & rings were worth.

The great untalented one and her entourage were accompanying their Crown Jewels in Europe for Paris Fashion Week. Apparently hotel security was not the greatest at their exclusive boutique mansion hotel that caters to Royalty, actors, VIP’s & vacuous, internet spawned celebrities. Conspiracy theories abound since the Kardashian Clan’s own bodyguards were absent from their posts. Usually the family travels with more armed guards than a parade of Brinks’ trucks.

I’m sure Rush Limbaugh & the right wing will blame the French gun laws for the robbery because the Kardashian Mob’s protectors were emasculated by being forced to leave their firearms at home.

Upon hearing the disturbing news in New York, husband Kanye West immediately cut short a concert and announced to the live audience ( an adjective that did not apply to his performance ) that he had to stop the show immediately to attend to a family emergency.

The audience was surprised. Apparently so were his audio engineers. It would have been nice if he would have given a “heads up” to his sound man that he was going to make such a sudden departure from the script. As the sometime fashion designer, producer & full-time self appointed philosopher king left the stage, the music from the hedonistic song that he was rapping? singing? talking over? lip syncing to? ……. continued to play over the P.A.

Clearly still audible, was not only all the prerecorded accompanying music and his own layered, multi track voice on the backing track harmony ( not surprising ), but also his lead vocal with all his brilliant social commentary word poetry. The guide track with his lead vocal continued to play for over thirty seconds in that horribly auto-tuned tone that many today seem to think a real voice projecting over a sound system sounds like if you talk or sing naturally.

We know that a great portion of the audience thinks this because they went crazy texting about the situation. They got into great Einstein vs. Jung debates about whether or not Kanye West was performing live or not.

If they could just define what “live” constituted, then they could have an intelligent discussion. Yes, it was “live” in the sense that Mr. West appeared to be alive in a physiological sense while standing on the stage. He did not appear to be a Tupac Shakur Coachella type hologram. His microphone was “live.” At any point he could interrupt or override the base lead track. This allows him to talk to the audience or preach his narcissistic, consumerist social commentary at any point in the concert and go off script.

Usually, when this happens at most shows of this nature, the main sound engineer will cut back severely the lead vocal track or cut it out completely as the performer, or in this case, Mr. Ego, …… bonds with his audience by telling them to purchase his cutting edge clothes he claims to have personally designed or buy more of his moronic, self indulgent, over-produced music.

( We don’t believe we are being too hard on this man’s reputation for self absorption & self admiration. Earlier this year, the mega millionaire went off in a prolonged series of Twitter messages where he lamented that the people of the world with even more money than him wouldn’t bankroll him. He claimed to have all sorts of brilliant, innovative initiatives percolating in his vast brain that would benefit all of mankind in one manner or another. In this case, his rants on social media mostly revolved around personally berating people like Mark Zuckerberg, Bill Gates & Mark Cuban to start sending him their spare pocket change so he could fulfill his destiny as the greatest mind of his generation.)

Usually, when Kanye becomes bored with listening to his own inane poetry piping into the ear piece during a show, he alleviates this by getting more intimate with his admirers. At some point, he starts talking to the audience and ignoring his music. In the midst of making a pithy, nominal social commentary observation, he often begs his audience to respect the privacy of his family and relates some tale about how difficult his life has become living with a Kardashian because he feels like he is in a goldfish bowl.

Nobody on the planet could have seen that coming Kanye.

It is all to be expected, but what isn’t, is that so many today continue to be shocked that Mr. West and others aren’t completely live when they perform.

As if it even matters.

These people usually aren’t very talented or even musicians, at least not of any great accomplishment. Instruments are not something they have ever learned to play or master. They are usually overpaid, under-talented singers or song stylists. Vocal practitioners of an entry level genre of entertainment that never ceases to fascinate the easily fullfilled. Their concerts are awash in instrumental & vocal electronic enhancements that should be obvious to even an unskilled amateur observer.

Somehow though, a huge portion of a generation of people seem to still care about this and want to believe everything they are hearing is actually live, …. at least the lead vocal. Possibly this is a deep seated subconscious notion that the music has to be legitimized because they at heart realize it is of a substandard, fraudulent nature, ….. and therefore their satisfaction is somehow tainted.

The truth is children, your average karaoke performance at the corner bar is by definition, often more live than Kanye West or thousands of other pop stars or rappers when they take to the stage. This is simply because the “live” portion as a percentage of the total sound spectrum that you are exposed to is greater.

The effort of your average eight beers and three sheets to the wind citizen, …… lip syncing & stumbling through the ten millionth tired, off-key version of REO Speedwagon’s “Keep on Loving You” is usually more genuine than the highly technical & comprised abomination you hear at what passes for a concert today.

Anyway, it all turned out okay. Thank goodness Ms. Kardashian-West was not hurt. Her army of publicists announced that she was “shaken but unhurt.”

We sure hope so. The last thing these entrepreneurs need is too much publicity. That might really hurt their stalwart reputations and adversely affect their future earnings potential.

Bruce Arians’ reputation has already taken a hit this year. The Arizona head coach is concerned about righting the ship on Thursday night. He may have to do it without QB Carson Palmer who is in concussion protocol. If Palmer is okay to go, the Cardinals still might not win against the Niners.

Even when healthy, Carson Palmer has the pocket mobility of a large, specialized piece of farm machinery. Back-up Drew Stanton isn’t much better. The itinerantly challenged Michigan State Spartan filled in last week and at least appeared slightly more agile than Palmer. However his mobility rating could still only best be described as:

“Well at least he can move better than Carson Palmer.”

The offensive line has not protected well this year. The rushing game and short passing game has not worked for Arizona so far this season either. The deep passing game has been the Cards’ strongest weapon, but if you live by that sword you die by that sword. Untimely interceptions, turnovers, big hits & a less than average Larry Fitzgerald being either covered well, not getting loose or being overlooked by Palmer have all plagued them this year.

In San Francisco, head coach Chip Kelly’s reputation has also taken a hit this year. The one-time boy genius of the NFL hasn’t done much with granted, a lacking Forty Niner squad. However, his former team, the Philadelphia Eagles have flourished without him while starting a rookie quarterback.

It would seem he would have nothing to lose by starting Colin Kaepernick at quarterback. Despite the controversy surrounding him, teammates, the media and fans in the Bay area would overwhelmingly support the change. Starter Blaine Gabbert continues to languish & drift in the static Sargasso Sea of other over-reach, high first round draft pick quarterbacks. He is the walking embodiment of less than mediocre.

With the Cardinals coming off the short week, the physical beating they received from the Los Angeles Rams & their own offensive shortcomings, we’re going to reluctantly take the Forty Niners at home getting the field goal. Even missing top defensive LB Navorro Bowman, we still are going to back the home team in a tough divisional game.

This game will probably be another low scoring, even lower in excitement, substandard Thursday night special.

We can only hope that it is more exciting and more substantive than Tuesday’s Vice Presidential Debate.