….. Most people are familiar with the political statement made by Tommie Smith & John Carlos at the 1968 Summer Olympics in Mexico City. That summer, both Martin Luther King Jr. & Robert Kennedy had been assassinated. Racial tensions led to civil unrest on the streets of America.

…. In protest, after winning the gold and bronze medals in the 200 metres, Smith and Carlos took to the podium during the medal ceremony, each wearing a singular black glove & gave the Black Power salute during the Star Spangled Banner.

…. In the political aftermath, nobody remembers that Smith ran a World Record time. 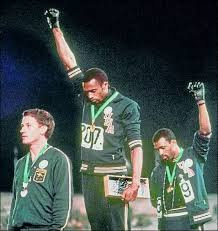 ….. Most people never give a second thought or remember the third man in the picture either. The initial reaction of many is that he probably was very uncomfortable in that situation and that nobody will ever remember who the name of the white guy who won the silver medal.

….. That man was Peter Norman. The Australian was a huge underdog in the race and his second place finish time still stands as the 200m record for Australia. Norman was an athlete on the rise and he probably would have broken his own record at future world championships or the 1972 Munich Olympics.

…. That is if he had ever been given the chance.

…. After the medal ceremony in Mexico, Norman explained to the press that he had become friends with both men and supported Smith and Carlos unequivocally. When Carlos forgot his pair of black gloves in the Olympic Village, the pair decided they both wouldn’t wear the gloves during the ceremony. It was Norman who suggested each one of them wear a singular glove. All three men had Human Rights badges sewn onto their Olympic Jackets to show solidarity.
…… The aftermath was predictable & long lasting. Smith & Carols faced enormous criticism in America and around the world. Their athletic careers never were allowed to reach their prime. The Olympic committee condemned the actions like the hypocritical cowards they were and are.

….. Peter Norman went back to Australia and his life was never the same. The Government back then practiced their own form of Apartheid wrapped up into a protocol called the “White Australia Policy.”

….. Although not as blatantly racist as South Africa’s Apartheid Policy, it was still a racist stratagem that favoured whites over people of colour. Peter was a quiet man who had never spoken publicly about this before. In the post Olympic fallout he admitted that he had always been against this official government form of intolerance.

…… Immediately his life changed in Australia. Public opinion polls overwhelmingly vilified him for supporting the two African Americans. His athletic career was hampered beyond repair. Despite being the best sprinter in the country, he was not picked for the 1972 Olympic team that went to Munich. This despite the fact that he qualified 13 different times for the 200 metres & 6 different times for the 100 metres. This was more than any other track athlete on the team.

…… As if that wasn’t enough, he found it impossible to find a job. He was blackballed in the athletic community. His lifelong dream of being a track coach in Australia at any level was thwarted despite the fact his former teammates said he was the most natural teacher of anyone they had competed with.

….. Although the “White Australia Policy” officially ended in 1973, certain laws & sanctioned practices continued into the 1980’s. The grudge against Norman never ended. He had to constantly change jobs when his employers were pressured by higher forces to fire him. He scraped out a subsistence existence teaching gym in remote parts of the outback, day labouring, meat cutting & part-time work for a Labour Union.

…… He even had trouble getting his autobiography published and when it finally was, many book store chains refused to distribute it. He didn’t make very much money as a result. In 1985 he ran in a charity race, tore his Achilles tendon and contracted gangrene. He almost had his leg amputated, but the resulting aftermath still led to horrible chronic pain, depression, pain killer addiction & alcoholism.
……. Over the years, there was a standing offer made to Norman to sign a document condemning the actions of Tommie Smith and John Carlos and apologizing for his own participation in the podium “gesture”. In exchange he would receive a full “pardon” and be allowed to pursue work with the Olympic Committee and his life long goal of coaching.

….. He wouldn’t even consider it.
…… Things had mellowed a bit by the turn of the century. So before the 2000 Olympic Games in Sydney there was pressure on the government & the Olympic Committee to bring Peter Norman back into the fold and score public relations points. They essentially offered him the same sleazy deal. Only this time he would be given a figurehead job, a salary and would march with the team in the Opening & Closing ceremonies in Sydney.

….. Peter Norman went public & told the nation about the glorified bribery. He repeated that he would never sign anything condemning his friends Tommie Smith and John Carlos. He did not participate in the Australian 2000 Olympics in Sydney.

….. Sadly, half the nation thought he should have signed the declaration according to opinion polls.

….. In 2006, Peter Norman passed away at the young age of 64 after a heart attack that his friends and family blamed mostly on the stressful life he had led.
…… Tommie Smith and John Carlos both gave eulogies and were pallbearers at his funeral. 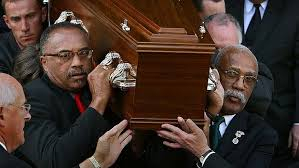 …… Finally in 2012, the Australian Government officially passed a law apologizing for the treatment Peter Norman had received. Even this was acrimonious with the Australian Olympic Committee still claiming that he had never been blackballed from the 1972 Olympic Team or from obtaining future employment.
….. In 2012, after the law passed, John Carlos in an Australian interview declared:
“There’s no one in the nation of Australia that should be honoured, recognized or appreciated more than Peter Norman for his humanitarian concerns, his character, his strength and his willingness to be a sacrificial lamb for justice.”

….. It is often said that the term “Hero” is bandied about all too often and frivolously in today’s world. When considering the case of Peter Norman it is obvious that this is true and we should raise the standard for the use of the word.
… Last week a different type of hero, “The Hero of the Upper Middle Class Nouveau Riche of Texas;” Johnny Manziel came off the bench to mop up for the Cleveland Browns in their humiliating 34-20 home loss to the Arizona Cardinals. The Browns led 20-7 at halftime and then decided to fold like a junkie under questioning, ….. giving up 27 straight points.

….. Josh aggravated his rib injury with all that running last Sunday, he became visibly Tutankhamen stiff in the second half and struggled to run the simplest plays. This means his 36 year old butt probably can’t start on three days rest and Johnny Football will inherit the assignment.

……. The team has tried unsuccessfully to hide McCown’s rib situation over the last two weeks like the Colts have been trying to obfuscate Andrew Luck’s similar problems.

…. It sure didn’t fool the Cardinals.

…… The Browns have given Manziel little practice time and few reps over the last few weeks because head coach Pettine doesn’t even want him on the team. Part of this was Manziel’s fault as he got him self tangled up in that little Grand Theft Auto – San Andreas driving escapade with his girlfriend a few weeks ago. The police and the NFL have told us that the matter is closed for now, so Johnny should be ready to go.
…. Andy Dalton doesn’t strike anybody as a hero. The quiet redhead regressed a little last week in the game at Pittsburgh, but after a few late turnovers by Big Ben, the Bengal Offense capitalized & stumbled to a 16-10 win.

….. Normally, we would never favour our “Team of Destiny” in a short rest week rivalry by this many points against their intrastate rival.

……. However, Cleveland already has the 29th ranked Defense in the NFL and CB Joe Haden & S Donte Whitner both had concussions in the loss to Arizona, so their status is doubtful. Dalton will find Bengals’ targets A.J. Green, Marvin Jones, Muhammad Sanu, Giovanni Bernard & Tyler Eifert open a lot and should have a field day
…. Even if the Heisman winning Hero of the Fraternity Boys cocktail party scene tries to work his magic for the Browns, it won’t be enough because he has already been dealt a losing hand.