Well, if you want them, we have them. 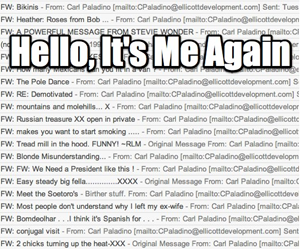 In 2010, Carl Paladino’s run for New York State Governor hit a snag when WNYMedia.Net unveiled the unsavory contents of of the candidate’s email outbox.

Paladino blames Congressman Brian Higgins for outing him as a purveyor of questionable content.

Bob McCarthy spoke with Rus Thompson and wrote a story for The Buffalo News about the investigation that led Paladino to this conclusion and the fallout between Paladino and Higgins that has resulted.

Which lead to problem #3:

Bob McCarthy took single-sourced (and false) hypotheses, portrayed them as facts, and pushed them onto the front page of the local newspaper.

Alan Bedenko, who was with WNYMedia.net at the time of the Paladino scandal, joins me to discuss all of the above.