Dear “get out of my gym” person… we all hate you. 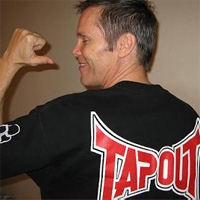 Get out of my gym. Can’t you see I’m wearing a Tapout shirt?

We searched the last 24 hours of Buffalo Twitter to find out what people were saying about New Year’s resolutions and found a great many people talking about getting fit.

On the flip side of that noble effort, we also found these people who couldn’t be bothered by anyone else’s good intentions.

Here are 11 horrible human beings living right here among us in the City of Good Neighbors.

How many more days til ppl stop going to the gym an start being the lazy pieces of shit they really are? I say about two more days. #NYR

Today going to the gym should be particularly awful – if you plan to give up in 3 months do us all a favor and just give up now #newbies — nick (@SexyNickSiradas) January 2, 2013

Worst times to go to the gym are right now. Got every goddamn slob in 15 miles attempting their New Years resolution messin up my routine. — Bill Brancatella (@BillyB313) January 2, 2013

Awesome forgot after NYE the gym becomes a tool shed for the next 2 months. #justgiveupnow — Chris Wanat (@HowdouWanat) January 2, 2013

not looking forwArd to going to the gym at 5…it’s gonna be packed…ugh #newbies #quitnow — Raelynn Harlach (@Stingrae24) January 2, 2013

A big fuck you to all the revolutionists at the gym… Go home! You’re taking up my space in the gym #fuckingkillingme

About to go to the gym… I swear to god if there’s not open machines ill punch someone in the face.

If the gym is packed with New Years resolution posers, I’m going to freaking lose it!

These are going to be the most crowded and obnoxious two months at the gym. (@ Buffalo Athletic Club w/ 3 others) 4sq.com/W3rQpe

And during our search we also found this one, single, solitary encouraging tweet from an angel among us.

Shout out to everyone hitting the gym, new yrs res or not!! Quit complaining already- healthy in 2013 🙂

Buffalo thanks you, Katey.